Third quarter earnings season just wrapped up and it wasn’t particularly pretty. At this blog I don’t normally discuss fundamentals (sales, earnings, margins) but I figured it might be a good exercise to go through as we head into the next year. I’m going to start at the S&P 500 index level, then look at sectors and finally drill down to individual names to see what’s really driving the growth (or rather lack of it).

Exhibit 1 shows 19 quarters of year-over-year % changes for these metrics. Mathematically, earnings growth is very close to the sum of sales and margin growth. 2013 was a year of cost-cutting and increasing margins. In 2014 sales and margins combined to drive decent results. And in 2015, things started to unravel. As labor market began to tighten, margins couldn’t be squeezed anymore and strong dollar made it harder to grow revenues. So what is a company to do? Well, both buyback and M&A activity are on pace to hit record levels in 2015. That’s all well and good but this “cheating” can’t go on forever – at some point organic revenue growth has to replace financial engineering if this recovery is to continue. 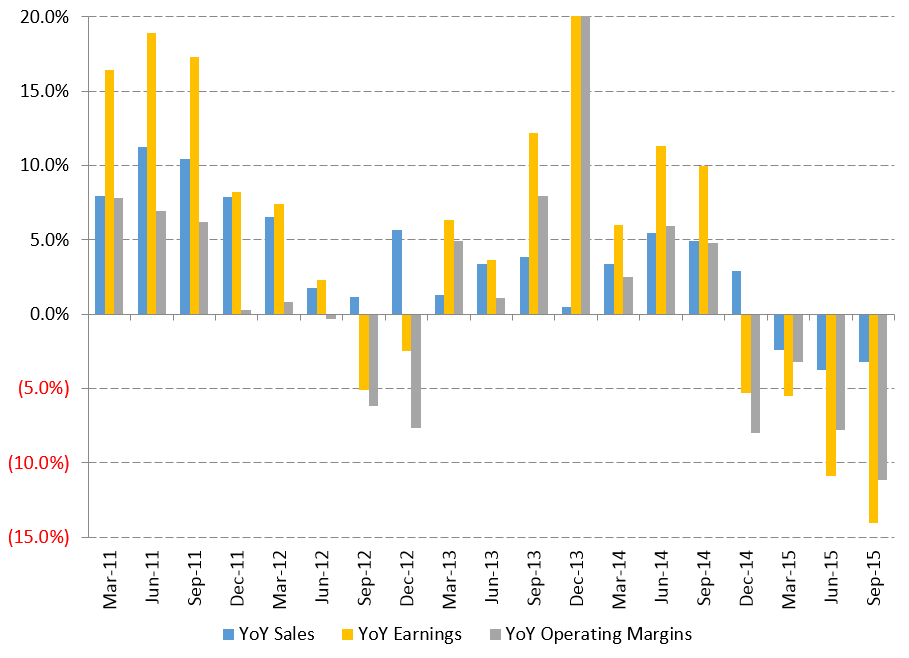 Ok, let’s get away from the big picture and drill down into sectors (Exhibit 2): 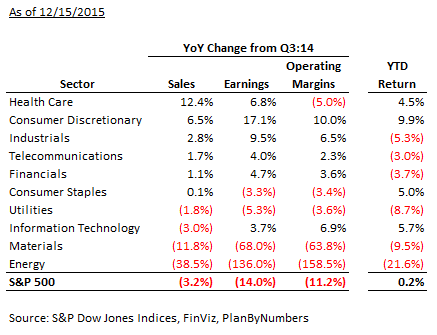 Exhibit 3 is a bit large but I think there are a lot of interesting nuggets in there. It shows best and worst companies in each sector based on sales growth (% growth from Q3 2014 to Q3 2015).

Consumer Discretionary – Dollar Tree was Family Dollar acquisition; Under Armour, Amazon and Netflix are real growth and bright spots in the market; home builders are also doing quite well. On the negative side, casinos are auto parts are not doing great.

Consumer Staples – most of the good ones were acquisitions and bad ones were divestitures, not much to inspire here.

Energy – once again, a real Shit Show. The BEST company in the sector had NEGATIVE growth in Q3, while E&P are getting absolutely murdered.

Financials – also lots of acquisitions on the good side and a lot of them are not “real financials” but real estate related. Asset managers, insurers and brokers dominate the negative side (Dodd-Frank, shift to passive management).

Health Care – lots of M&A here too, but some of the companies are growing organically. Although less acquisitive big pharmas and diagnostics are not doing too well.

Industrials – a little bit of everything here, aerospace & transports well represented (think ISIS & low fuel prices). Heavy equipment and diversified industrials are in bad shape though. I would argue that the bad side is more representative of the real global economy.

Information Technology – semiconductor companies, Harris and Activision are acquisitions, while Facebook and Apple are actually growing. On the right, eBay was a spin-off of PayPal but the others are real. Anything to do with storage had a tough year, as did certain semis. IBM is another you-know-what Show.

Materials – M&A is a big driver again, some chemicals are doing ok. Other chemicals, aggs and metals are just ugly.

Telecommunication Services – tiny sector (didn’t used to be) and a cash cow.

Utilities – Nothing spectacular on either side of the ledger…

So there you have it – revenue growth is coming from a handful of real stars and a whole bunch of M&A activity. So what’s going to change in 2016? Well, the Fed just started to tighten which lessens a big liquidity tailwind. There is good old fashioned multiple expansion that might bail us out again, but I’m not sure we got much left on that front with the Fed being less accommodative. Dollar is still strong and might remain so given the Fed vs. ECB dynamics.

For years now the companies have used financial tricks like share buybacks to increase EPS and buying growth through M&A deals. For the market to continue going up we’ll have to see some real topline growth and I’m just not sure where it will come from at this point. I’m not bearish per se, just curious to see how the market handles this pickle. I would never count out the American consumer though what with improving job situation and glimmers of income growth.