Inflation has been a big investment topic for the past few months and with it Federal Reserve (Fed) policies have come under increased scrutiny. I wanted to do a post about Fed’s toolkit in fighting inflation – what can they do, what have they done so far, what are they likely to do in the near future.

The Fed can [theoretically] reduce level of demand in the economy (and thus inflation) through several tools:

Let’s look at each one in a little more detail.

Theoretically higher interest rates make borrowing more expensive and reduce aggregate demand in the economy. For example, higher credit card rates may reduce purchases on credit and higher mortgage rates may slow down home price appreciation. Likewise, if companies have to pay higher rates on debt to finance investment projects, they might pass on more of them. All this in aggregate should put a lid on  price increases.  So far the Fed has only raised once by 0.25% at its March 16, 2022 meeting (Exhibit 1). However, this is where things get interesting with item #2. 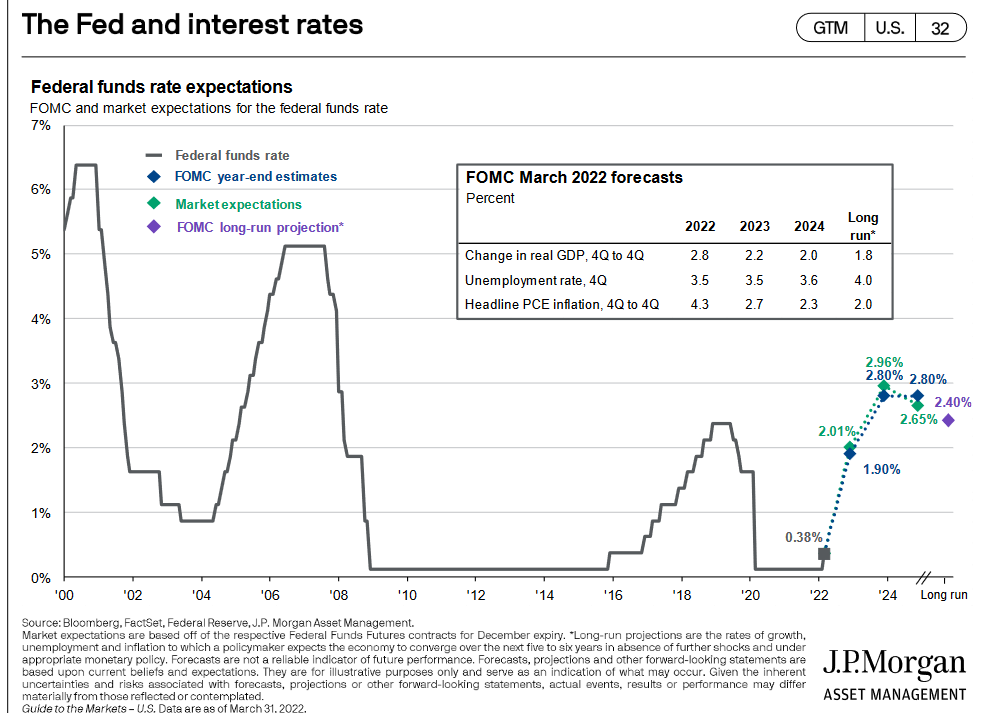 Although they have actually increased rates only once, various Fed officials have been talking for months about their plans to get more aggressive and hike rates at least six more times in 2022. Those expectations are the first dotted lines  in Exhibit 1.

Our central bank can only set Fed Funds rate for banks and not the actual borrowing rates for the government, companies or individuals. While it can’t set market rates directly, certain markets do react strongly to Fed Funds changes. Exhibit 2 shows the policy rate in purple since 2000 along with 2 Year Treasury rate in orange and 10 Year Treasury rate in blue. It’s very obvious that the shorter-term 2 year rate follows Fed Funds very closely, while the longer 10 year bonds have a much weaker relationship. 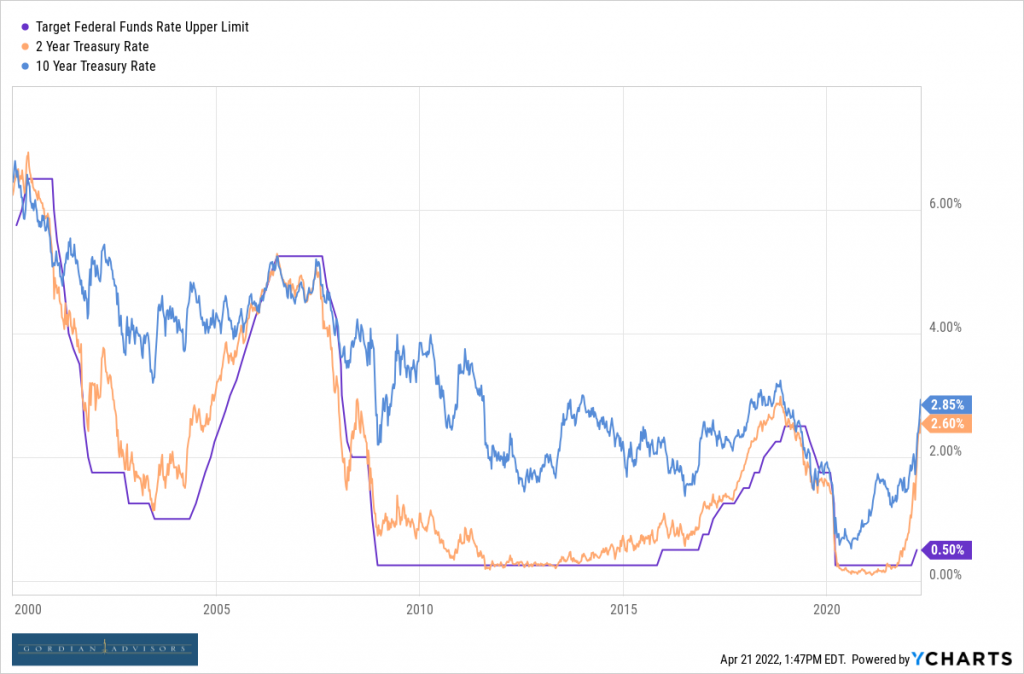 Now that we established this, let’s take a closer look at what’s happened to various rates in 2022 (Exhibit 3).  While the policy rate increased by only 0.25%, the 2 year rates has gone up by full 2.0% or 8 times the change. Just to reinforce this further, Exhibit 4 shows this relationship over the last 10 years. It’s quite clear that while the 2 year market rate has always been a leading indicator, the decoupling in 2022 has been extreme. So Fed’s signaling has been heard (and believed) by the market loud and clear.

Exhibit 3 – Yield Curve Changes Since the Start of 2022 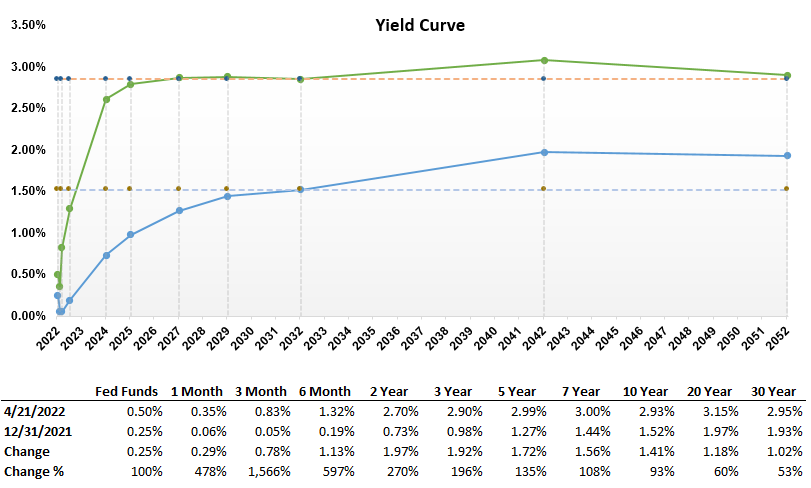 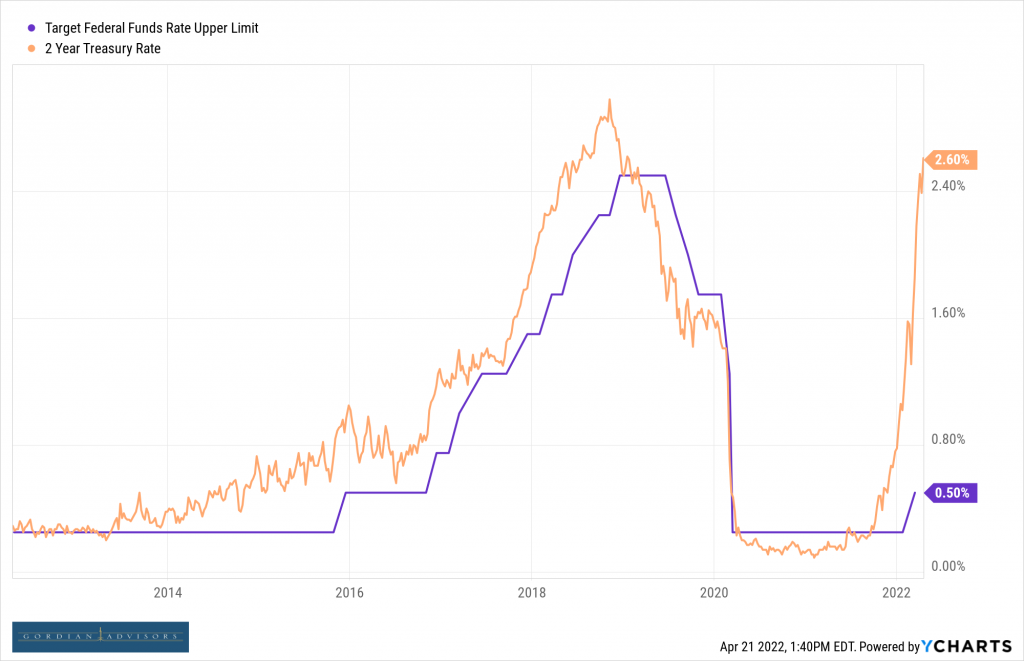 Another powerful way the Fed has been nudging interest rates is by purchasing massive quantities of bonds in the open market and holding them to maturity. The basic idea is that if you buy lots of bonds, their prices will go up thus driving interest rates for those bonds down (remember bond prices and rates are inversely correlated). Prior to COVID, Fed balance sheet peaked in early 2015 at roughly $4.5 trillion (that’s Trillion with a “T”). It then slowly dropped by about 16% through late 2019 (Exhibit 5). When COVID first hit, Federal Reserve threw everything it had at the market, purchasing enormous amounts of all types of bonds – treasuries, mortgages, corporates (even some junk bond ETFs). From March 2020 to present, Fed’s holdings jumped by 110% to the enormous $9 Trillion. For 20 months it has been buying $120 billion of bonds each month. It then started “tapering” these purchases in November 2021 and reduced it to zero by March 2022. Now that it’s no longer adding to its security holdings, the next step in the balance sheet reduction process is the “runoff”, or quantitative tightening (QT). As bonds mature, the runoff process will stop reinvesting the proceeds, thus actively reducing its holdings. Outright market sales of existing assets are not being discussed at this time.

So, similarly to the rate increases, the Fed hasn’t actually reduced the balance sheet at all but had announced policies that will do so gradually. 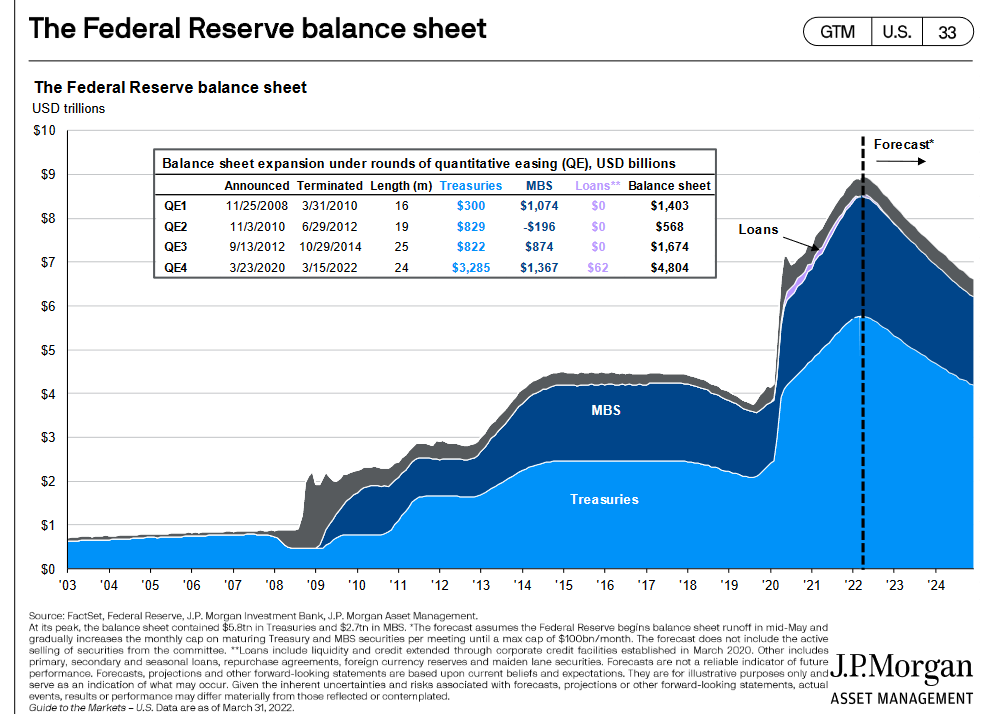 To sum it up – Federal Reserve hasn’t done very much to remove accommodation yet but has promised to do so over the next few months/years. As a result, the market adjusted interest rates up significantly to match these expected changes. You might say “So what, what do I care?” I’ll discuss that in the next post on what these rate changes have done to bond prices. Hint: it’s “to” not “for”.