In the last post I looked at what the Federal Reserve is doing and how interest rates across the bond market are reacting to it. In this one I want to look at what bond prices have done. A few days ago there was an article making the rounds showing that 2022 bond performance is the worst since 1840s. I don’t have the data going that far back, but we can look at returns of a bond fund you can actually invest in. Exhibit 1 shows rolling 12-months price change of  Vanguard Total Bond Market Index Inv (VBMFX) going back to its inception in 1986. The bad news is that we did indeed just hit the lowest one-year price drop of -11.8%. The good news is that extremely low return periods have historically been followed by hitting very positive returns in the next 6 to 18 months. 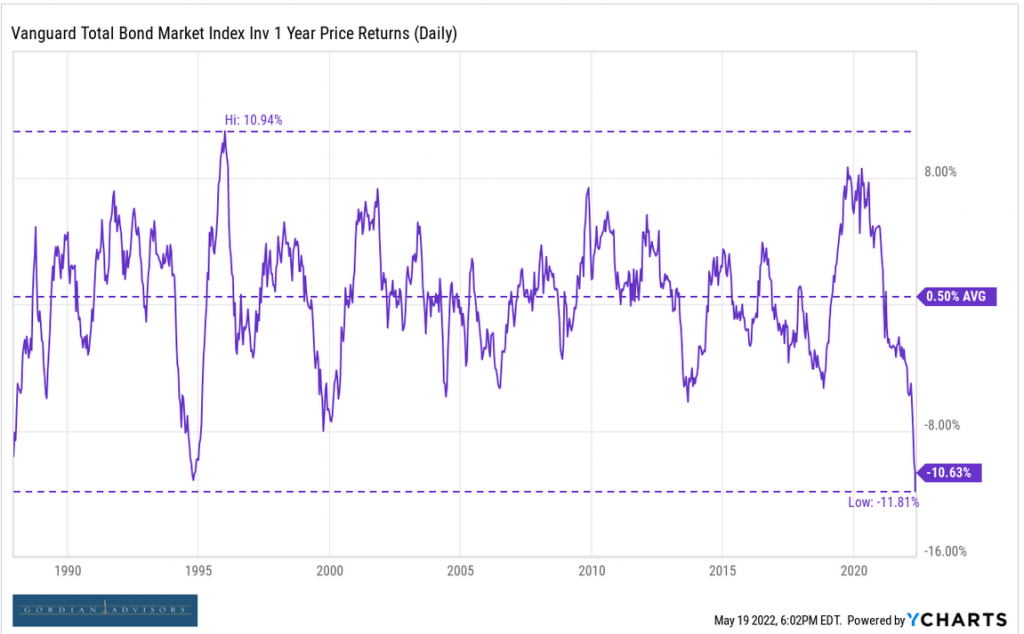 Another way to predict forward returns of bonds is figure out what the interest rates will do. As an example, let’s use the largest bond holding we use in client portfolios – Vanguard Intermediate-Term Bond ETF (BIV). I’m going to try not getting too nerdy here, but we do require some bond math explanations. How sensitive a particular bond or bond fund is to interest rate changes is determined by a metric called duration. It’s a complicated calculation that’s largely related to how long from now the bonds mature. BIV is an intermediate-term fund that holds bonds maturing between 5 and 10 years from now. Its duration is currently 6.5. What it says is that for every 1% change in interest rate, its price would go up or down by 6.5%. The relevant interest rate here is the closest one to its average maturity which is 7-year Treasury Bond. You can see in Exhibit 2 that there is a very strong inverse relationship between that rate and price of BIV. When the rate goes up, the price goes down and vice versa. 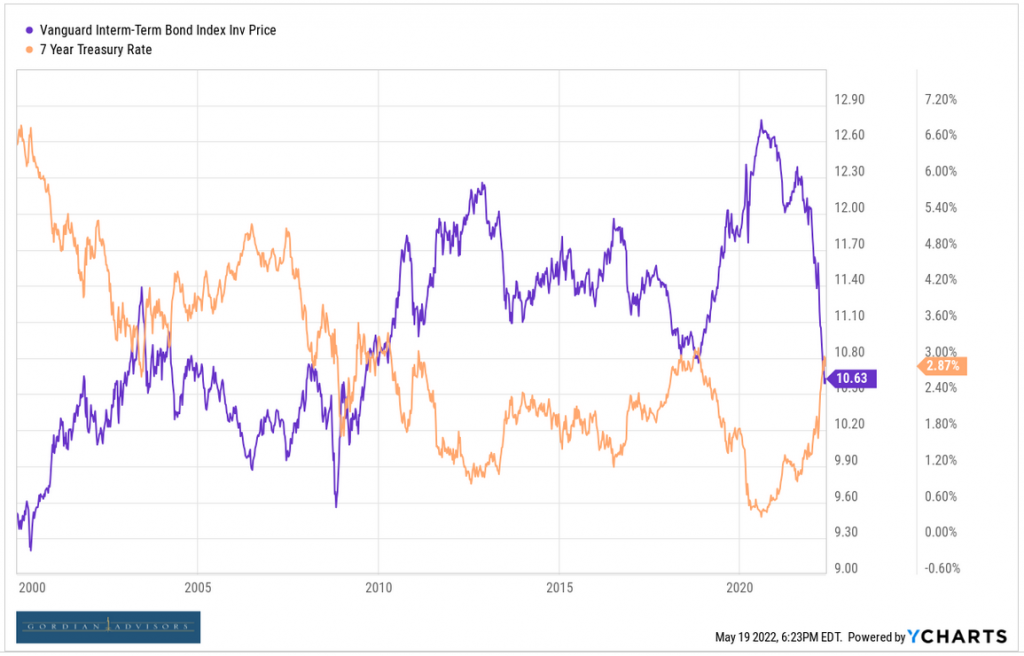 We do have some guidance form the Fed though, as shown in Exhibit 1 of the last post. They are expected to raise short-term rates to about 2% by year-end and maybe 3% by end of 2023. Exhibit 3 shows the longer-term relationship between Fed Funds rate, the 2-Year and the 7-Year Treasury rates. The 2-year follows the Fed very closely and typically front-runs its actual policy moves as the market prices in future changes ahead of time. The difference between the two is shown in the bottom panel and it typically averages about 0.25%. It does, however, tend to spike up or down around big changes in Fed policy stances.  The rates started moving up in earnest in October 2021. Since then the 2 Year moved up by 2.2%, while the Fed Rate went up by only 0.75% (Exhibit 4). So the spread between the two widened from basically zero to 1.5%.

Let’s do a quick guestimate of where BIV might end up in a year or so. Let’s say the Fed Rate goes up to 2.25%, adding a typical spread of 0.25% would get the 2-Year rate to 2.5% which is where it already is today. The more relevant 7 year rate is harder to predict but let’s say it goes to 3.25% or up 0.45%. Using the 6.5 duration gets us additional BIV price decline of about 2.9%. BUT, but…. the forward yield (interest expected to be paid in the next 12 months) on the fund is now up to a respectable 3.6%. Thus, the total return (price change + yield) may still be slightly positive over the next year. 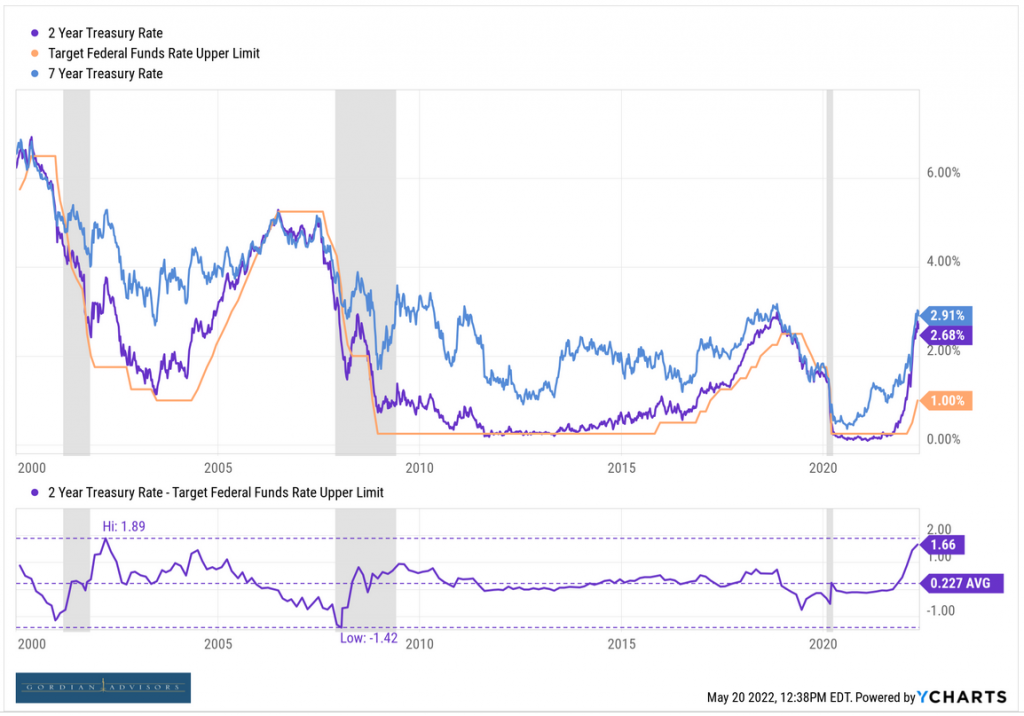 You might wonder why I decided to torture you with analyzing this complicated and highly unpredictable topic. My point is simply this. Yes, the declines in high-quality bond funds have been painful especially during the time the stock market is dropping as well. Aren’t bonds supposed to go up when stocks go down? Typically, yes, but it’s not set in stone and they sometimes move together when the interest rate increases line up with economic slowdowns. Actually, that is literally the point of Fed’s rate increases – slow the economy down to lower the runaway inflation. And slower economy = lower earnings = lower stock prices. The good news is that we might have seen the worst of bond declines for a while and the newly increased yields may offer some decent protection from further losses.