2018 has been a year of the trillion dollar buzz (and couple of trade wars too). On August 2, Apple became the first publicly-traded company to hit a trillion dollars in stock market value. Just a month later on September 4, Amazon also broke that barrier intraday, although it has stayed below it since.

Top 10 companies in the S&P 500 now make up 25% of the index capitalization (Exhibit 1). However, this top-heavy situation is not so unusual as Ben Carlson discussed just over a year ago (Exhibit 2). What is interesting is how little staying power there is among the index heavyweights, with about half rotating out every five years. When Ben wrote his post back in July 2017, top 10 (all same companies) made up only 20% of the index. We’ll see what that will be a year from now (last I checked trees still don’t grow to the sky…).

And how quaint it now seems that in 2011 the big story was Exxon and Apple duking it out for the title of the world’s largest company. Back then both were at about $350 billion in market cap. Seven years later Exxon is still at $340 billion whereas Apple is three times that (that’s one tall tree rooted into fickle consumer tastes, but I digress)! 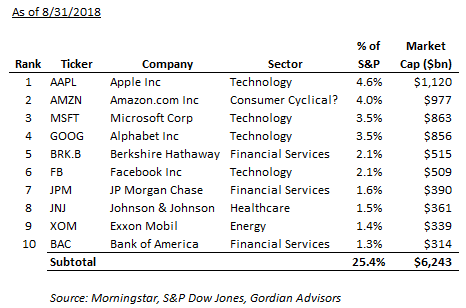 Let’s focus on just the technology darlings and make up a FAAMG group – it’s like FAANG but replacing smallish Netflix at $150 bn with more consequential Microsoft.  We see some incredible growth in the past few years (Exhibit 3). Just in 2018 alone these five companies added $1.1 trillion in market cap and almost $2 trillion since the start of 2017. That’s 64% and 37% respectively of the market value increase for the entire S&P 500 index. Yet another way to slice it – they grew at the same rate as the SPY in 2016, twice as fast in 2017 and 4.5 times as fast in 2018!

Just to put this whole discussion in a global perspective, Exhibit 4 shows 25 largest countries by value of their public stock markets as well as the 10 S&P companies from Exhibit 1 (highlighted in green). There are only nine countries with larger market cap than Apple. In fact, South Korean market which includes Samsung (arch-rival to Apple’s most important smart phone segment) is worth less than a trillion. Fairly important Western European nations of Spain and Italy fall somewhere between Facebook and JP Morgan on this scale! 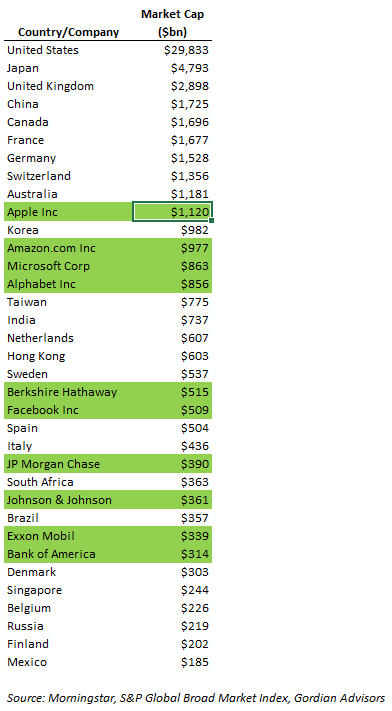 It is also noteworthy just how fast Amazon has gobbled up $100 bn milestones on its way to a trillion. Wall Street Journal had a cool chart comparing the two behemoths’ rise (Exhibit 5). 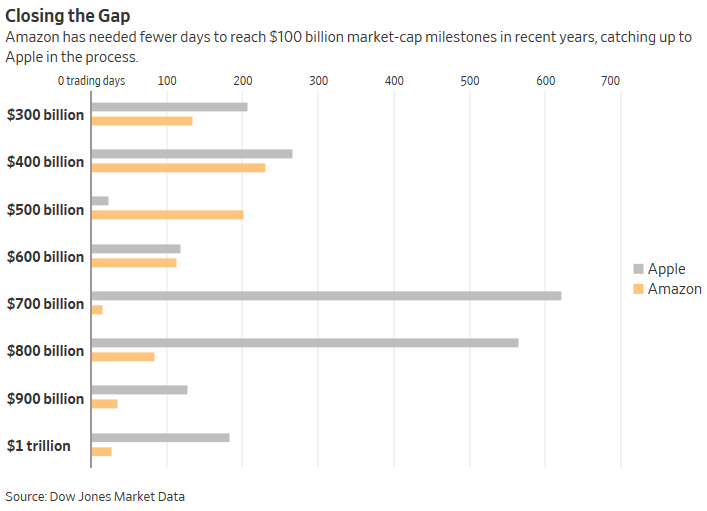 But as a good example of fickle nature of this market cap jockeying is what happened to Amazon and Facebook in the past year. The two companies (or was it two guys?) have crisscrossed each other’s market value several times since early 2014 (when both were worth just $160 bn). Last time they converged was on November 1, 2017 at about $530 bn. Since then their fortunes diverged as Amazon skyrocketed to just below a trillion, while scandal-plagued Facebook is sitting at roughly half that (Exhibit 6).

Exhibit 6  – Market Caps of AMZN and FB since September 2017

Personally, I think a trillion is just another number made significant by human brain and media sensationalism (did you see my click-bait title). As such there is not much predictive significance to it. I’m not making any market calls or predictions here, just pointing out some fascinating factoids. It bears repeating the old adage of trees not growing to the sky. These companies might continue becoming more valuable and literally take over the world…  Or their rise might be checked by the combination of market forces/competition, government regulation and consumer tastes. Time will tell and I for one will be watching and learning.