Bear markets occur fairly frequently and are an integral part of investing.  Nonetheless, most investors never learn to accept them regardless of how many cycles they have lived through.  The math of recovering from a portfolio drawdown is unappealing and sometimes downright scary.  For example, it takes 67% increase in the portfolio to recover from a 40% drop and a 100% to break even on a 50% decline (Exhibit 1). 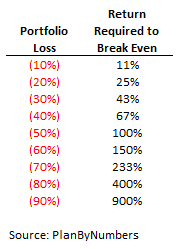 Most common definition of a bear market in stocks is a 20% drop from the high point.  Sometimes these severe corrections last for years, sometimes they are over in a few months.  Most professional investors analyze bear market top to bottom and not the annual returns.  There is plenty of analysis online that provides these data, you can see an example here or stories with more color here.

However, individual investors tend to look at portfolio returns in terms of years.  For example, 2012 was a good year. 2008 most definitely was a bad year, while 2009 was a great year that didn’t feel like one.  Given our recent history of two major bear markets in the 2000’s decade, one can be forgiven for thinking that markets are “always” crashing and the good years are few and far between.  That is not true.  As shown in Exhibit 2, there were nine negative years for the S&P 500 (proxy for the U.S. stock market) out of 44 since 1970.  Going back even farther to 1930’s, the last decade was not typical and had more negative years than normally (Exhibit 3). 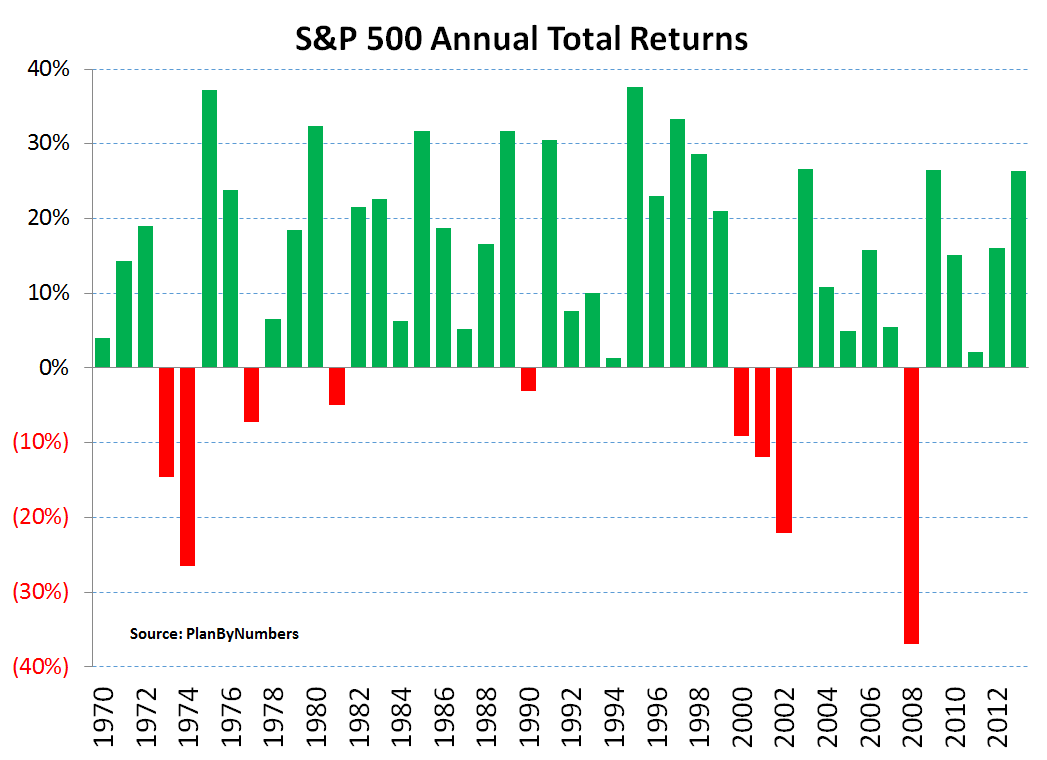 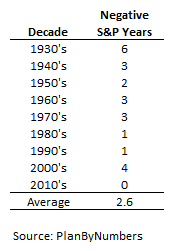 In the past 44 years, we had six periods of at least one full negative year for the S&P.  They lasted 1.5 years on average and took 2.3 years for a recovery (Exhibit 5).  Three of them very fairly mild, while the other three were quite severe and required 60% return to “climb out of the hole”.  Two out of three severe periods occurred in 2000’s and still feel very fresh.  Many investors are still having a hard time trusting stocks and are sitting on the sidelines in cash. 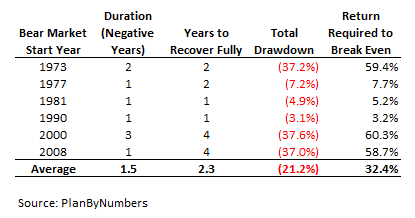 I’m not trying to minimize the impact of bear markets, they can be vicious and tough to deal with especially for older investors.  Nevertheless, the markets inevitably recover if you stay the course.  The real damage to the portfolio occurs when people try to time the market, sell at the bottom and wait way too long to get back in.

In the next post, I’ll take a look at how adding international stocks and bonds to the portfolio changes the numbers.