The house voted for the tax bill today and the Senate is expected to approve it tomorrow. As we have been looking at the changes and what they mean for our clients, I’ve done some analysis for my own understanding of where Federal receipts come from and how those sources would be impacted by the new legislation. I figured I would share the numbers with my readers while trying to be as impartial as I can and stay away from the political issues.

If you google “Sources of Federal Tax Revenue”, you’ll get bunch of pictures similar to the one in Exhibit 1. However, it can be misleading as Payroll Tax represent such a large chunck of revenue and is earmarked for Social Security and Medicare systems. So let’s take a look at the underlying dollar and percentage numbers for the most recent fiscal year ended in September 2016 (Exhibit 2). You can read detailed descriptions of various revenue sources here.  For the purpose of this discussion, let’s further isolate the three sources affected by the current tax reform (Exhibit 3). They accounted for 57% of total Federal revenue or $1.87 trillion dollars in 2016. Estate & Gift tax is a contentious political issue, but in economic terms it’s fairly small at $24 bn  or 1.1% of this smaller pie. Therefore, let us concentrate on Individual (83%) and Corporate (16%) Income taxes. 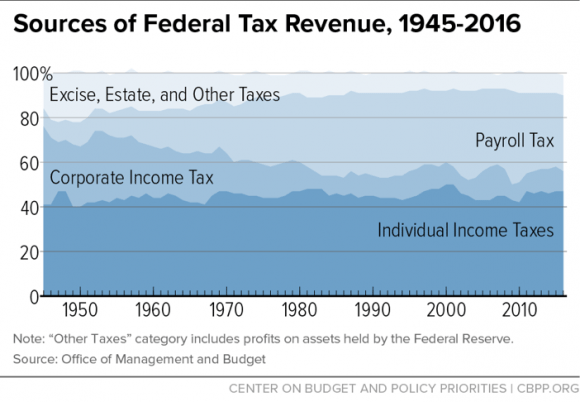 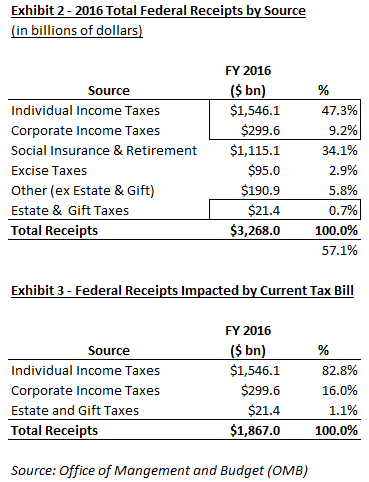 What else can we do with the data? Exhibit 4 shows percentage of Subtotal Revenue  over time. The importance of each tax diverged from 1950s through mid-80’s but since then Individual stayed around 80%, while Corporate has been fluctuating right around 18%. It’s hard to see Estate and Gift Taxes so I threw it in Exhibit 4.1. After staying in 3-4% range in the 60’s and 70’s, it’s been on the decline finally dropping to the current 1% ish after the estate exemption increased dramatically in 2009. 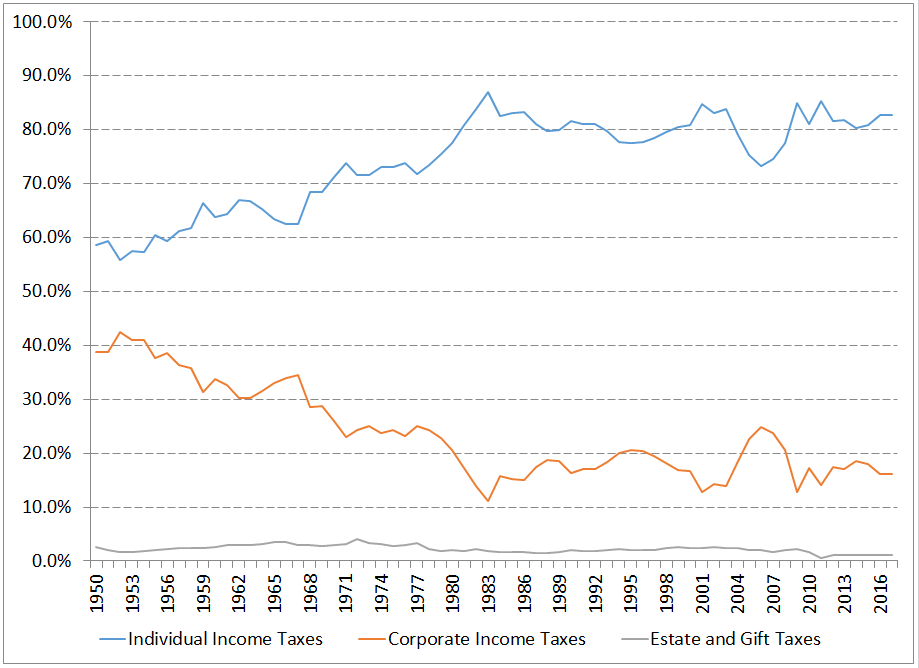 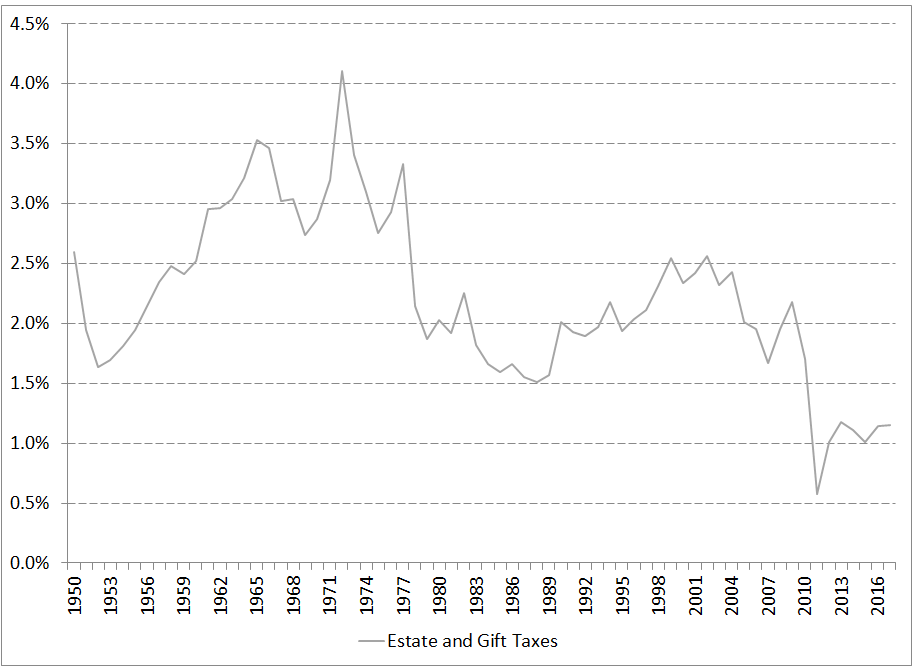 What else? We can also compare Tax Receipts to the country’s GDP – after all if GDP is a sort of income measure, we can get an effective tax rate the Federal government collects on that overall “income” (Exhibit 5). This measure is very volatile but overall the trend (dotted red line) has been to the lower “tax rate”.  Another way to look at it is Annual Growth Rates by decade in Exhibit 6. There were significant differences in growth rates in different periods – most striking was the overall decline in tax revenues in 2000’s (thank you Bush 43) despite GDP growing at 4.2% annual rate! However, from 1950 through 2017 the overall tax receipts grew at almost exactly same pace as the GDP/income of the nation. The composition of those receipts changed, with more of the tax burden falling on individual taxpayers vs the corporations. Although, it would be difficult to isolate changes in business structures of corporations vs pass-through entities (which are taxed on Individual side of the ledger).

Exhibit 5 – Subtotal of Tax Receipts as % of Nominal GDP 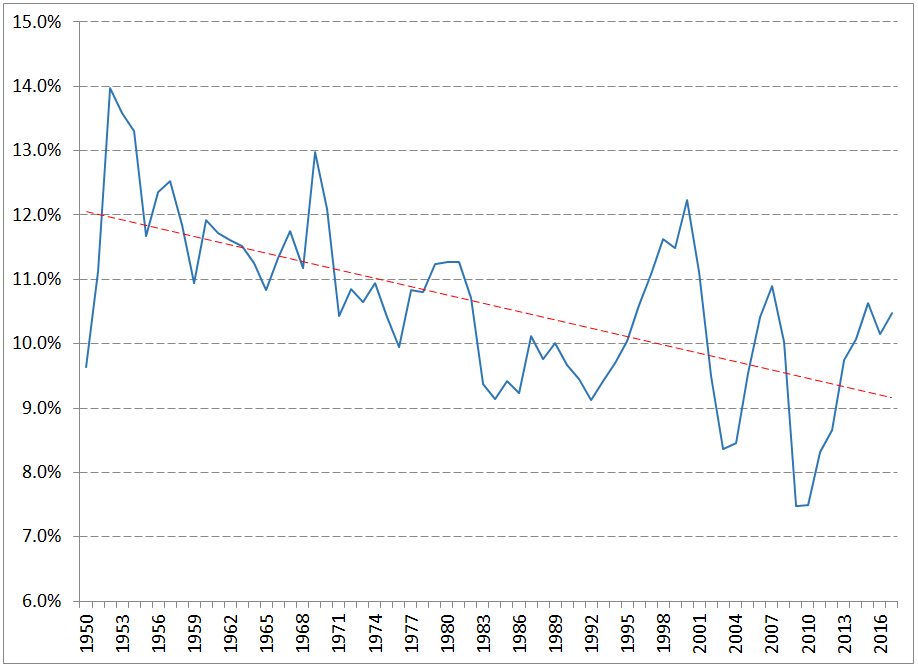 Exhibit 6 – CAGR for Tax Receipts and GDP by Decade

My original plan was to give it couple of years and see how the annual dollar receipts would change and whether the promised growth would materialize to offset the lower rates. That was before I realized just how volatile year-to-year tax revenues are (Exhibit 7). Economy, corporate profits and regulatory changes swing those numbers all over the place. Standard Deviation (a measure of volatility) of overall tax receipts is 5+ times that of GDP and 12x for the Corporate tax piece. 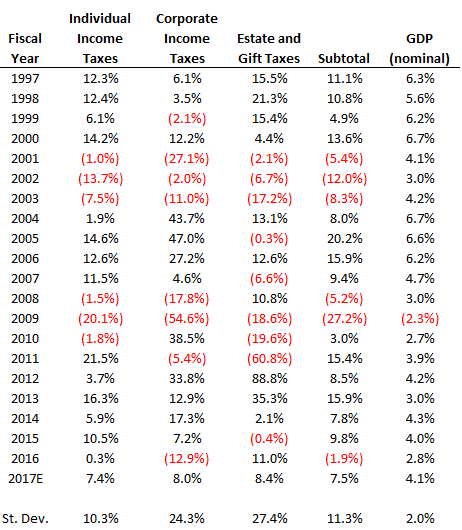 Anyhow, hope you learned something new and interesting from this data dump. One thing is pretty clear right now – almost everyone (and every corporation) will pay less taxes in 2018. I’m not making any predictions beyond that, we’ll just wait and see overall impact on the economy and the “quality of life” will be!