Continuing from a post couple of weeks ago, I wanted to take a look at assets invested in various flavors of the fund and see what that means for the American Funds business model.

Assets Under Management (AUM) for each share class and distribution channel for The Growth Fund of America is shown in Exhibit 1. As of September 2015 total AUM for the fund is $135 billion, of which fully half (51%) is invested in A shares and 56% in the traditional retail channel overall. The good news is that there is only $448m left in the not-so-great B shares or less than one percent of the fund’s assets. Fee-based shares account for 14% and the various retirement classes add up to 25%. College funds come in at a relatively small 6%.

A word of caution – this is just one fund and the situation might look quite different for other American funds. For example, retirement and college funds are dominated by target date funds which would show a very different breakdown by channel. 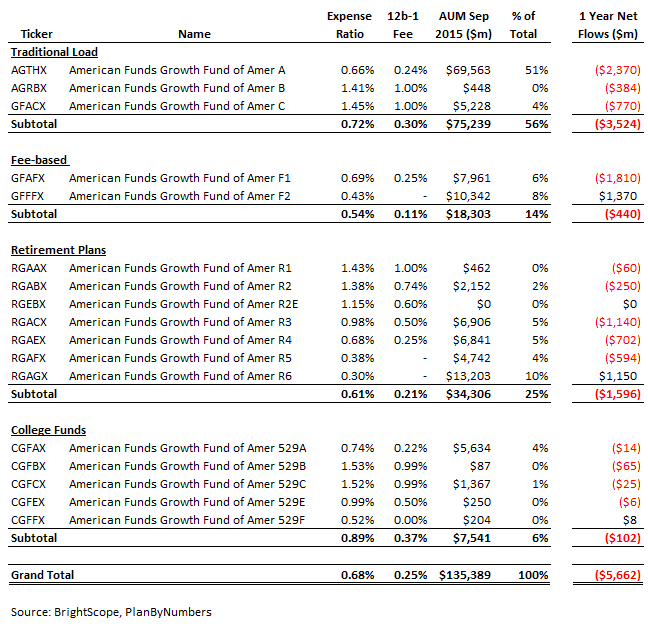 On the business side of things, American is doing just fine with this fund. The asset-weighted total expense ratio clocks in at 0.68% and amounts to $916 million a year! Of this, American keeps $572 million and pays out $344 million to advisors/salespeople in 12b-1 trails. You can see why this is such an attractive business model – a relatively reasonable expense ratio adds up to a lot of dollars to go around the portfolio management and distribution channels.

I was also curious about how things have changed in the last few years. Exhibit 2 compares the current numbers to September 2007, which was the height of American Funds dominance before the financial crash. Total AUM for the fund declined by 31% and it was relatively uniform among the various distribution channels. One exception is the 529 channel, which grew by 65% from a relatively small base. Nevertheless, there has been a lot of shifting between various share classes within each distribution channel as the company introduced more options with better expense structures. I’m glad to see that B shares (both retail and college) are all but gone since the company closed them to new sales in 2008 and is slowly converting them to A shares as the back-end loads expire. 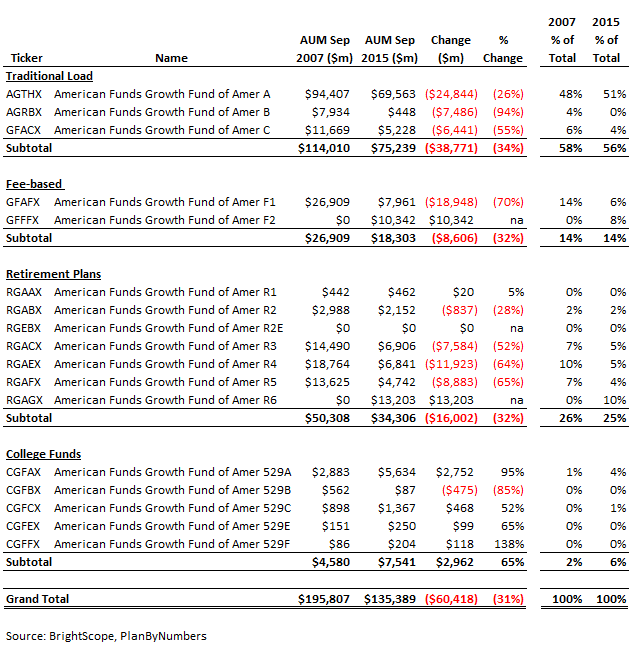 American Funds is alive and well, still plenty profitable and back to gaining new assets. They are adjusting to the new world of investment distribution by offering more options to advisors and investors. Unfortunately, their willingness to accommodate have led to proliferation of share classes to the current 17. Let’s hope they slow it down and focus on the basics instead.