The first week of September brought about incessant chatter of a period of bad seasonality in the market. There were countless media reports, blog posts and CNBC segments all touting that September is “the worst month”. So I decided to take a look at the numbers and provide my take on (un)importance of seasonal patterns in investing.

First, let’s define what “seasonality” is in the stock market. Investopedia defines it as “A characteristic of a time series in which the data experiences regular and predictable changes which recur every calendar year.” So basically, it’s a tendency of the market to act a certain way in any given time period. ON AVERAGE (this is the important part).

Some professional investors (particularly traders) pay close attention to these patterns. Stock Trader’s Almanac is a very popular desk reference book on seasonality (I have one but don’t look at it much). There is even a mutual fund that trades based on seasonality – Probabilities Fund A (PROAX) (I do not recommend it).

So what does monthly seasonality looks like? Exhibit 1 shows average monthly returns for S&P 500 and percent of time they were positive. Sure enough, September is the worst month with average loss of -0.5% and only 45% positive performance. December, on the other hand, is by far the best month to be in stocks.

It’s also clear that there is solid evidence behind the Best Six Months strategy (November – April). Although the other six months average much lower return, I still don’t see why you would “Sell in May and Go Away” if you can still make 1.5%? It might make more sense in more normal interest rate environments when you could make more than that on a 6-month CD and avoid equity risk. 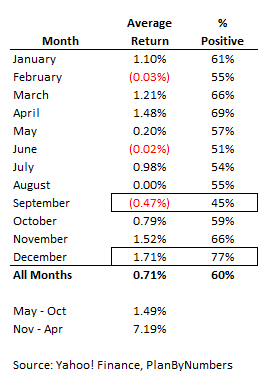 Ok, so you should short the market every year on September 1st, right? Not so fast – let’s take a look at September returns for each year going back to 1950 (Exhibit 2). Top and bottom 5 are highlighted in green and orange, respectively. So if you get out of stocks (or even short them), you might miss out on some decent returns including 4 of the last 5 years and 8 of the last 10. Clearly, “every calendar year” part doesn’t seem to apply here. 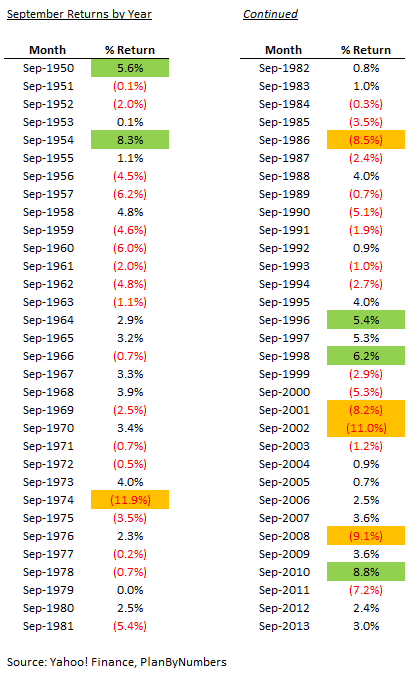 Moreover, exact timing of your trades gets even more tricky. Josh Brown had a post last week on September performance patterns: Charting the Average September Stock Market. It shows that on average first couple weeks of the month actually tend to be quite good and the drop starts around the 16th.

It is true that September has the worst record of the 12 months. However, it does not mean that you should sell your investments each year on August 31st! If anything, it might be a good time to invest some extra cash just in time to enjoy the seasonal run-up into year-end and up to April.

Seasonality has its place and can be a useful tool. Be that as it may, I would recommend using it as just one of the data points you look at to guide your investment strategy.