Lately the market has witnesses frequent changes in sentiment driven by trade wars, Fed policy, etc. So I wanted to take a look at the more analyzable underpinning of market fundamentals (i.e. earnings). Warnings: this post is pretty nerdy so you can stop reading after the first two charts, but if you are into arcane market analysis do continue through the extra credit and AP sections…

So why do we care about fundamentals and earnings? Well, take a look at how closely earnings and stock prices more together (Exhibit 1). They don’t always move in lockstep, but changes in earnings do explain majority of price moves. Some notable exceptions are the late 90’s when prices got WAY ahead of earnings (and then violently converged by Q3 2002). There was also a period of strong earnings in 2010-11 where the markets bounced around driven by fears of European meltdown, Fiscal Cliff in the U.S., and other fun developments. And most recently, there was quite a disconnect in Q4 2018. 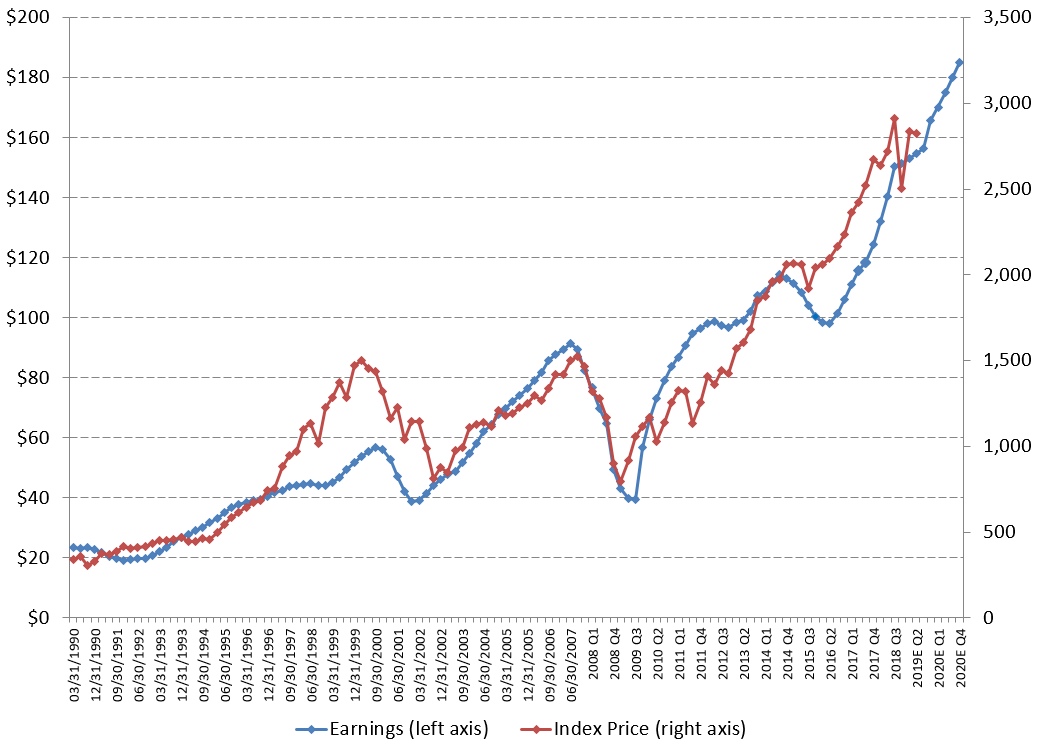 So what explains those divergences between price and earnings? The basic idea is that the market return is explained by two sets of factors – fundamentals (expressed as earnings) and sentiment (expressed at P/E ratios or what investors are willing to pay for each dollar of those earnings). I published a post on this about 5 years ago if you need a primer.  Here is an updated chart breaking down these return factors (Exhibit 2). As you can see, in all three of the divergence instances change in the P/E multiple played a big role. From 1995 to 1999 the multiple expanded significantly each year. Whereas in 2010-11 investors got skittish and reduced the multiple for what turned out to be solid earnings. The last bar before the dotted orange line shows 2018 calendar year. Earnings grew a respectable 22%; P/E ratio, however, dropped by 23% from 21.5 to 16.5 and resulted in a 6% price decline. I put the data as of September 30, 2018 in the first bar after the orange line. I find it quite interesting that earnings haven’t changed at all during the last three months of the year and the entire 14% drop in price was driven by multiple contraction as investors got skittish. Then change of tone in Fed communications magically reassured everyone and these same investors decided that still growing earnings deserved a higher multiple after all (5/13/19 bar). 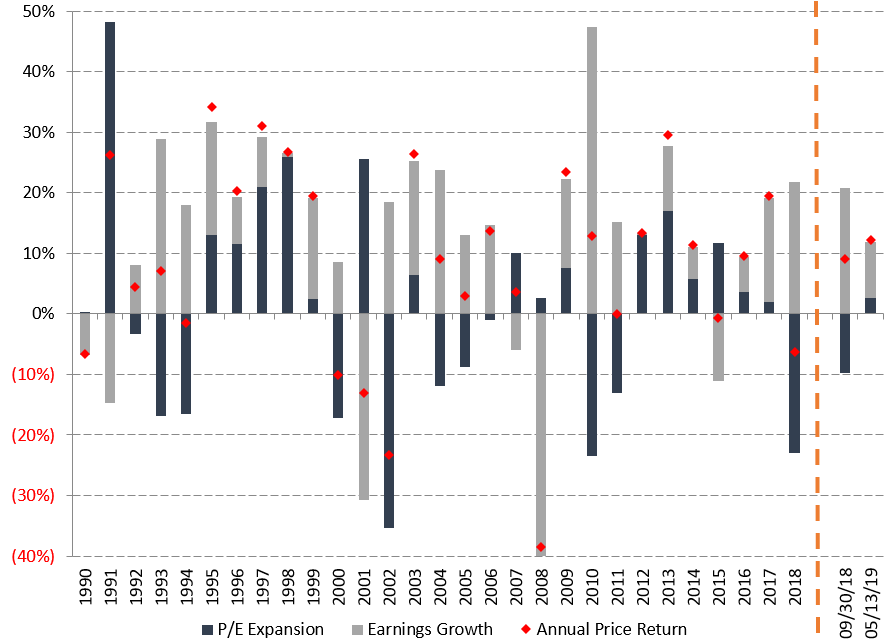 Of the two market drivers, fundamentals are very hard to predict as so many factors affect earnings – economy, trade, interest rates & Fed policy, legislation & tax changes, currencies, commodity prices and sales/margins (see AP section) just to name a few. Sentiment, however, is downright impossible to pin down ahead of time as it’s driven by fickle human nature with its exaggerated fear and greed swings. That’s why we don’t time the market but rather build robust portfolios that can withstand market swings based on each individual client’s timeline.

Let’s throw in GDP in this analysis of what drives stock prices. When the yield curve briefly inverted in late March 2019 (and then again this week), there was a lot of talk of imminent recession and thus bear market. Exhibit 3 shows GDP, earnings and price all indexed to a 100 in Q1 1990. There is actually decent correlation between the market and GDP as shown in panel 1. However, if we put all three on the same axis and scale (panel 2) it’s obvious that the magnitude of GDP changes is much lower than the other two metrics. In fact, volatility (standard deviation) of earnings is twice that of GDP and of price is 2.5x of GDP.  So while GDP does matter, the market’s relationship with earnings is much stronger.

Even though earnings growth is probably the most important fundamental factor, it’s not the only one. Let’s take a look at few others (Exhibit 4). The first panel shows year-over-year earnings growth in %, it’s just a different way of showing the earnings lines in Exhibits 1 and 3. 2017-18 had very strong growth driven by reduced corporate tax rates as well as solid economy. Earnings are projected to grow “only” 9% in 2019 as tax cuts wear off and trade war takes its toll. YoY dividend growth in panel 2 is also strong, which adds to the total market return.

Now, the next three panels is where it gets interesting and the AP credit comes in. Earnings is a product of sales (or revenue) of the business and its margins (or how much of each dollar of sales falls to the bottom line). Panel 5 decomposes those two factors of earnings growth in a similar way Exhibit 2 does with earnings, P/E and price. In the past 3 years earnings were driven in roughly equal part by sales growth and margin expansion (shown separately in panels 3 & 4). Many market observers are concerned about both of these drivers going forward. Margins are already at very high levels and it’s hard to see any further expansion as tight labor market and tariffs are leading to increasing costs. Sales are also high, partly helped by strong dollar which increases value of foreign revenues. I’m not saying that the market is going to crash but we should temper our expectations of further improvement in fundamentals. And that brings us back to sentiment and what will people want to pay… 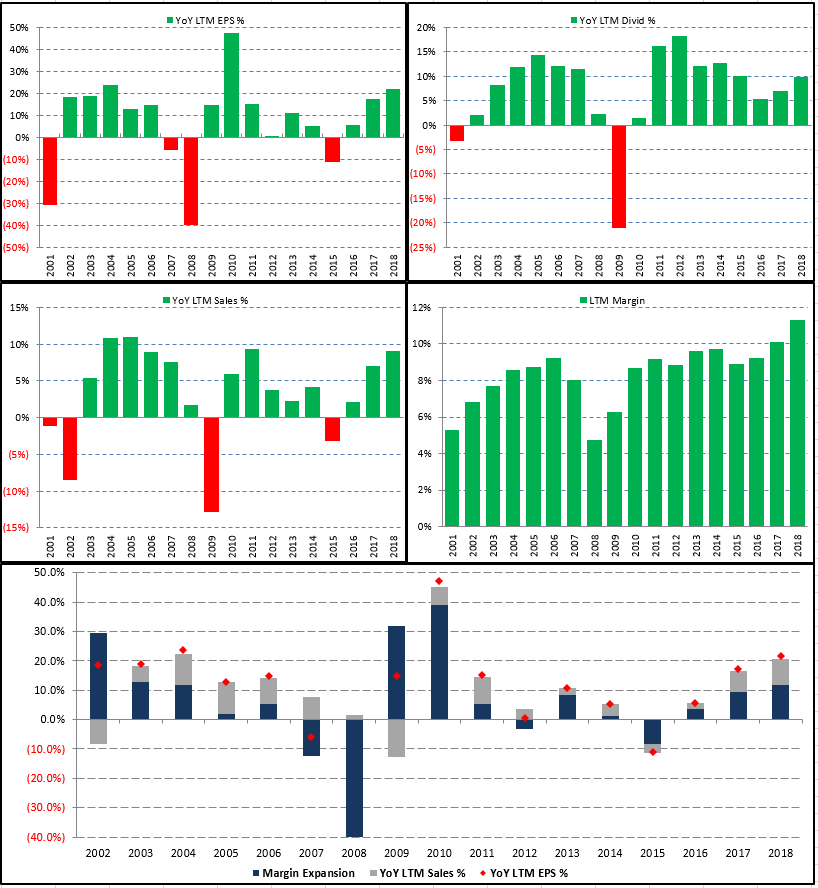