There has been a lot of press lately about the dearth of IPOs in 2016. That got me curious and I decided to run some numbers to see what’s going on. So I’ll do a couple of posts to see who is going public and how it’s working out for them.

Before I get into numbers I’d like to lay out my methodology which is a bit unconventional for IPO analysis.

Ok, Exhibit 1 shows the number of companies by Industry/Theme that have gone public with the top two areas each year highlighted in green.  Overall the deal activity peaked in 2014, pulled back in 2015 and is non-existent so far this year. Some other observations: 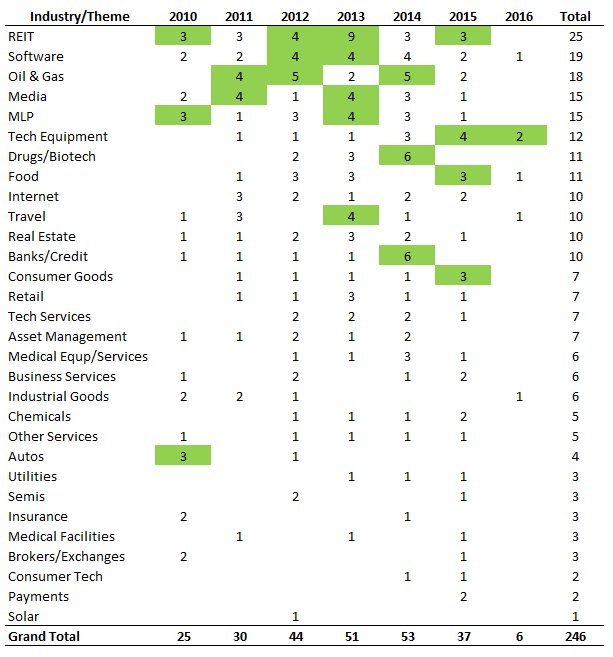 Ok, let’s now zoom in and take a look at the largest 30 newly public companies in Exhibit 2 (current market size, not the capital raised in IPO). To see what sorts of IPOs are happening I broke it down by deal type: 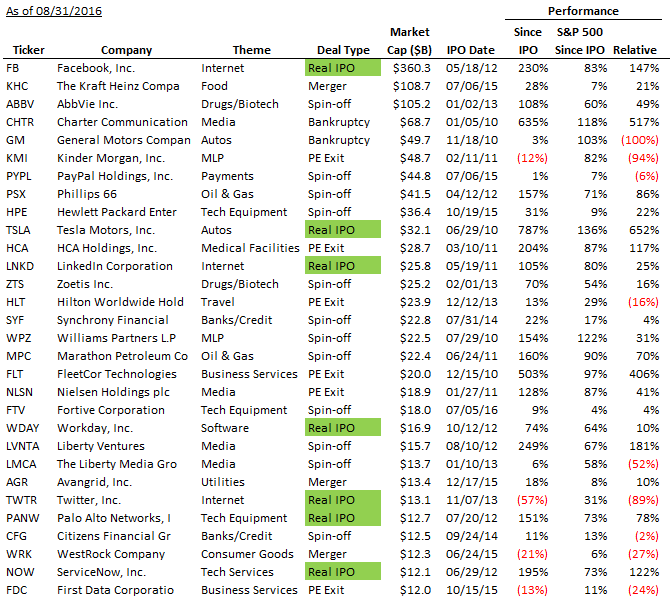 So out of the top 30 deals, only 7 were “Real IPOs” (Exhibit 3). Relative returns are all over the map, but actual IPOs do seem to work pretty well (Twitter being the big exception). Again, the real dogs would have fallen out of the $2bn range.

Anyways, no big actionable insights here, just a primer on IPO types and a look at the slowing activity. Venture-backed companies keep raising private capital and staying away from public markets longer than ever. So we might see IPO tables continue to be dominated by PE Exits and Spin-offs. And I’ll continue to index most of my stock exposure buying Facebooks and Teslas along with GMs and Twitters!