In part 2 of the global population series we’ll take a look at the effect of migration between countries. Exhibit 1 shows migration stats for the largest 43 countries in the world. The latest available migration data is for 2012, so we’ll cover 10 years from 2002 to 2012. The table separates “Net Migration” (in millions) from total population change and thus “Natural Growth”. We then calculate both of those numbers as a percent of starting population. For example, 5.3 million Indians moved out of the country, but that number was dwarfed by the natural (births minus deaths) growth of 165.3 million! In relative terms, only 0.5% of the 2002 population left, while natural growth rate was 15.3%. 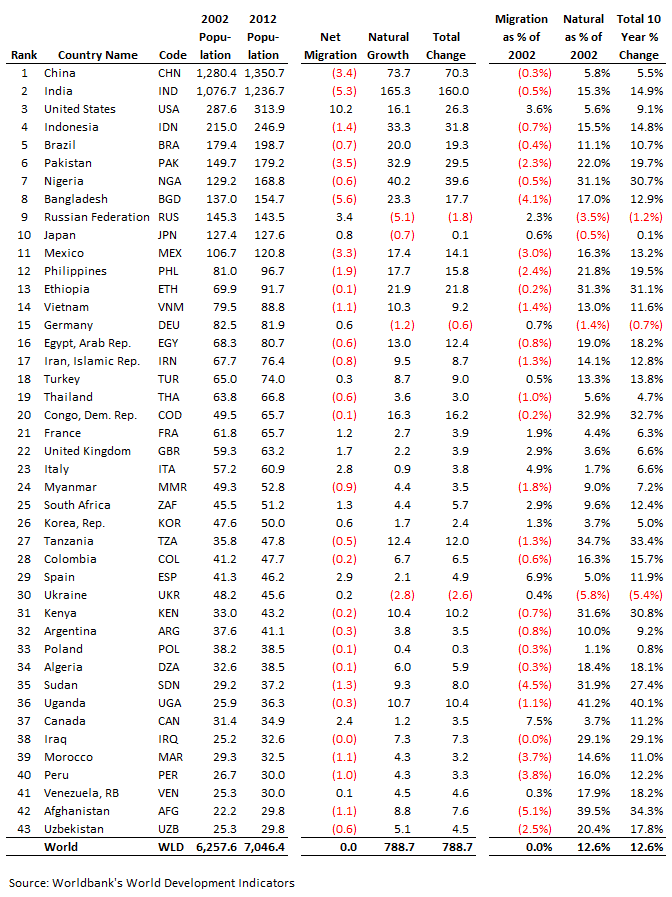 Let’s re-sort the same table to see who are the biggest migration gainers and losers in absolute number of people (Exhibit 2). United States had net immigration of 10.2 million people over the last ten years. And this is only official legal immigrants that doesn’t include an estimated 12 million illegals! Regardless of your political persuasion, it’s clear that immigration reform is sorely needed in this country.

Surprisingly, the next country on the list if Russia with 3.4 million. Being a Russian emigrant myself, I find this number very interesting and I will address it in the next table. Natural demographic forces still overpower the strong inflow of immigrants leading to declining total population there. The rest of the list is mostly comprised of Western European countries (and Canada). 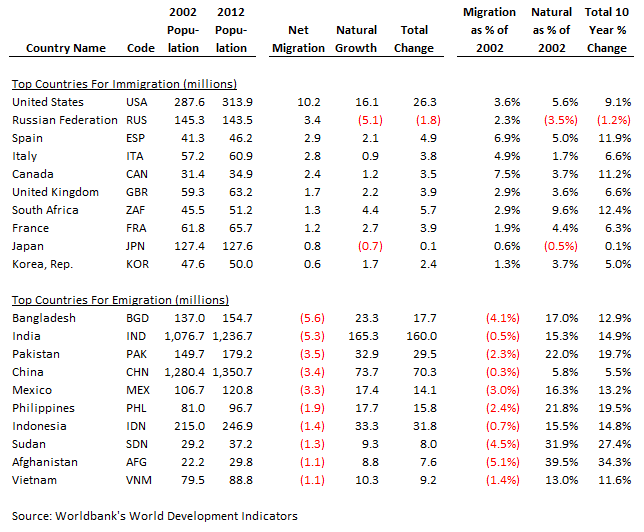 Now, all of the above tables only show largest countries with population of 30 million plus. If we include smaller nations, the things look quite different. Exhibit 3 sorts all countries by migration as % of 2002 population.

All top five gainers are wealthy Gulf nations importing “guest workers” (more like “slave” labor) from South Asia (see Bangladesh, India, Pakistan in Exhibit 2). As an extreme example, Qatar had population of only 600,000 in 2002 yet 1.4 million people migrated there in the last 10 years for an astonishing migration percentage of 215%. Many of these “guests” are working on infrastructure projects for the FIFA 2022 World Cup, which has been quite controversial and might be cancelled altogether. If you like complaining about your job or just want a guilt trip, read this Washington Post article.

A lot of the net losers are violence-plagued nations all around the world. And many of the former Soviet republics on the list account for movement of ethnic Russians back to the motherland that surprised me before.

Exhibit 3 – % Migration For ALL Countries – Top and Bottom 20 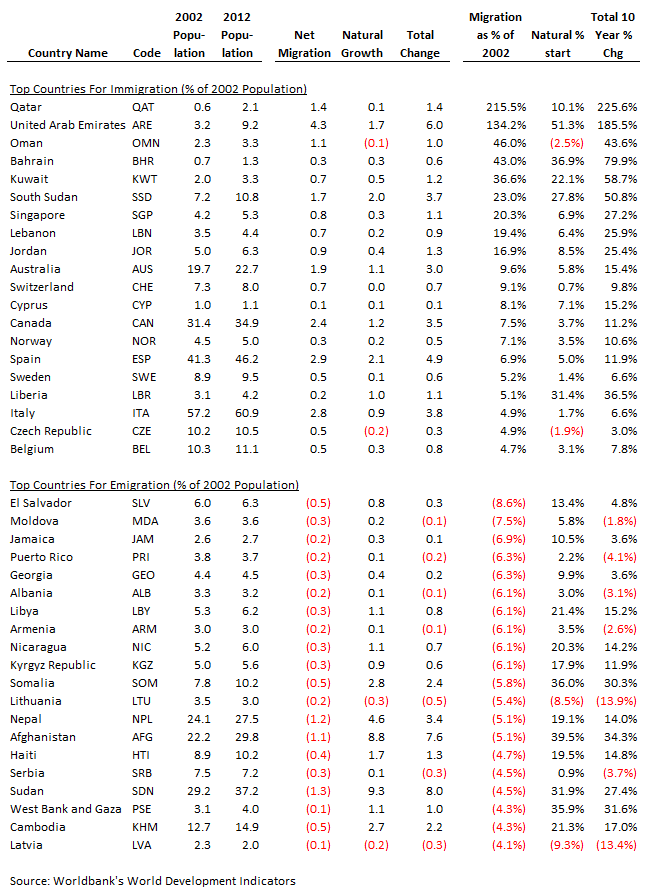 Not sure if there is any sage investment advice to be gleaned here but it’s still pretty interesting stuff! Next time we’ll roll some of these numbers up by region and income levels.