Several times in the past few weeks we’ve had conversations with existing or prospective clients that brought up the idea of rising mortgage rates and how much it would cost to wait on buying a house. So I decided to look back at the history of 30-year mortgage rates in the U.S. as well as where we might be headed and how much it will cost homebuyers.

Exhibit 1 shows mortgage rates going back to 1971. We are still near all-time lows in rates which have been as high as 18.5% in 1981! The red line is the 10-Year Treasury Rate and you can see that mortgage rates generally follow it quite closely (albeit with a 1% to 3% premium which is currently at 1.6%). Most mortgage professionals would agree that 10-year Treasury is THE number you would reference to divine where mortgage rates are going. Since the 1980’s there has been a general downtrend in rates and we hit a low of 3.3% in 2012. With Federal Reserve well into their rate-raising campaign, most people expect treasury and therefore mortgage rates to continue trending up for the foreseeable future. The only question is how high can they go. 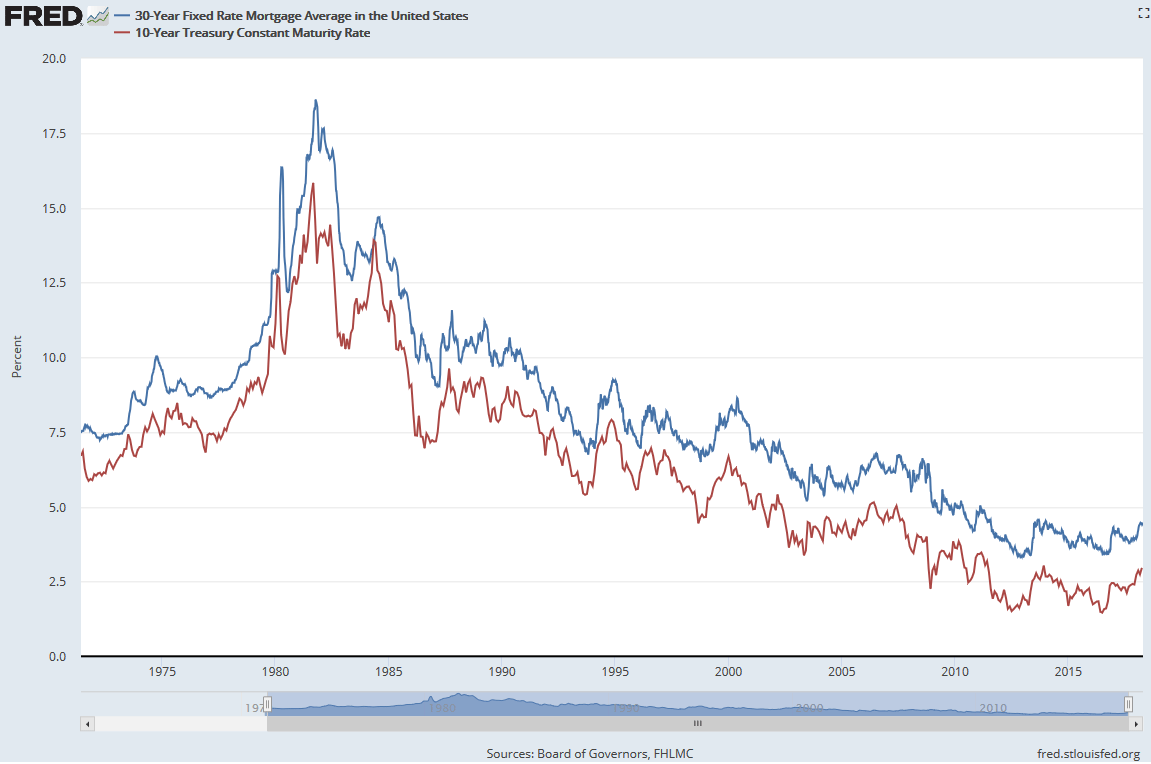 So let’s throw out some abnormally high rates seen in the 80’s and focus on more recent (and relevant) history (Exhibit 2). Since 2001 the rates have been in a 3% to 7% range and maybe for conversation’s sake we can assume that this is the “normal” area for them to be in. How high can they really go before people refuse to buy houses and take out mortgages? In my [slightly] educated guess analysis 6 or 7% seems tops. 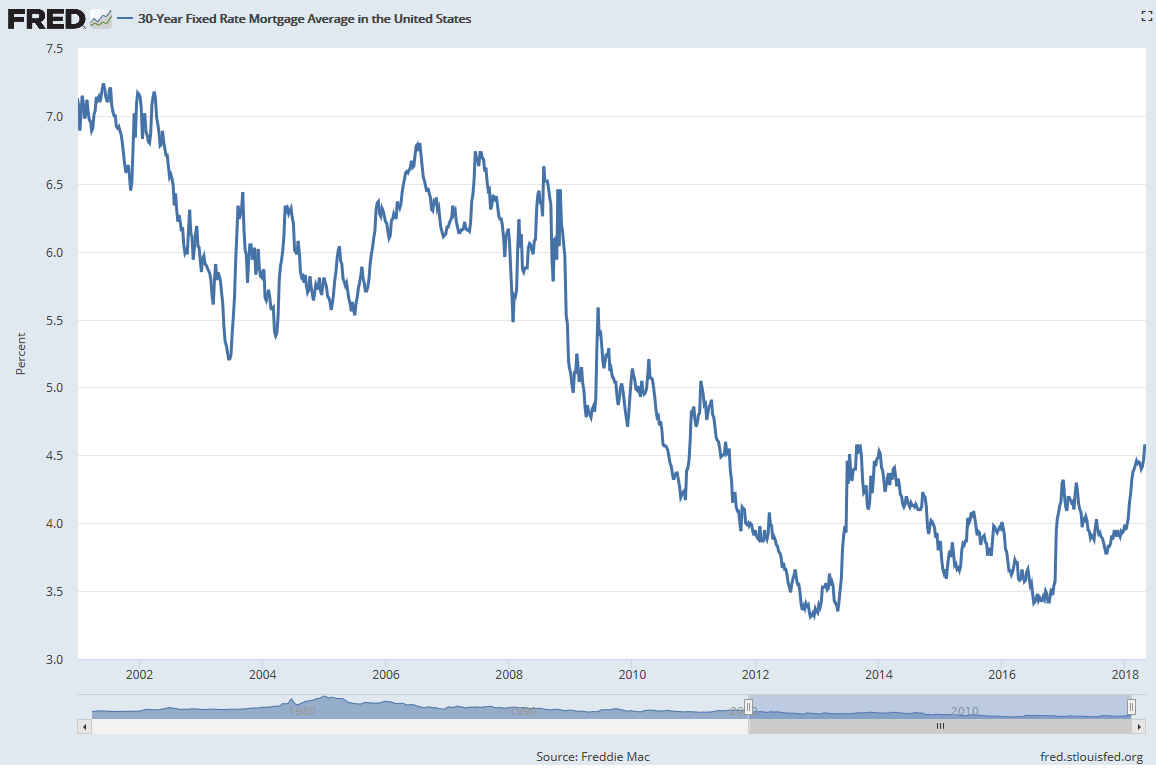 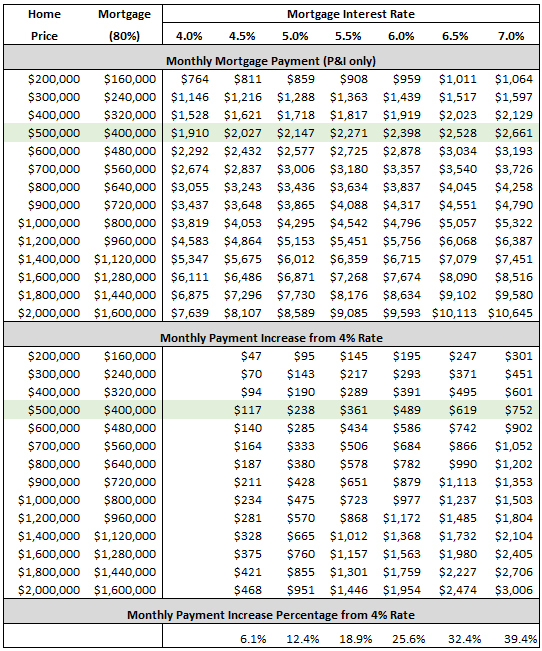 Yet another way look at it is how much you end up paying in total interest to the lender (Exhibit 4). So looking at our $500k house example, at 4% you would pay $287k in interest over the 30-year life of a loan versus $463k at 6%. Which is a 61% increase in total interest paid although it’s “only” 25% increase in monthly payment (oh, the wonders of amortization!). The last row of numbers shows total payments made to the bank as a multiple of the original principal balance. In our $500k example, a borrower would pay $400k in principal plus $463 in interest at 6% rate for a total multiple of 2.2x. So right around 5.3% rate on a 30-year mortgage is a cross-over point where you pay more in interest than in principal. For me personally that might be the point I don’t want to cross just for the principle of it! 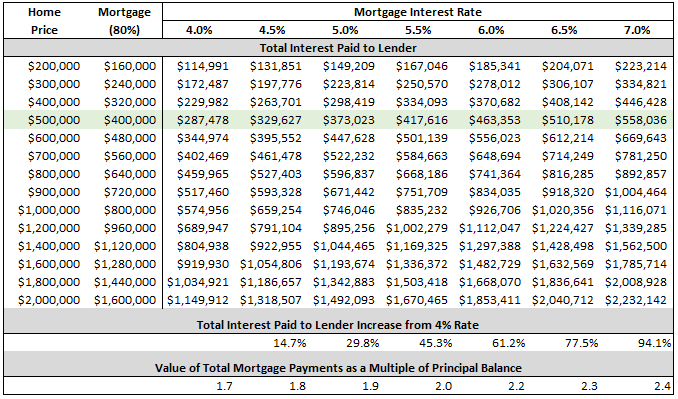 There are a lot of numbers in these tables, but I hope I explained it enough to make some sense and that you learned something interesting/useful. For most people these global interest rate movements don’t matter as much as the simple question of “how much can I afford to pay a month and still cover my other obligations”. Still, I find it helpful to know what the cost of waiting might be as we delay buying a new home (and therefore obtaining a mortgage at current interest rates).