Now that the market has had a solid bounce off the bottom, I wanted to review where we stand. Exhibit 1 shows the year-to-date path of the S&P 500 index. The market made a new all-time high on Wednesday, February 19 and then had a rapid 34% decline into the low of Monday, March 23. This was the fastest bear-market in history that happened in a month with just a few bounce attempts along the way. The market then staged a huge 19% rally in just three days from Tuesday, March 24 to Thursday, March 26 recovering about a third of its losses. After some more volatility, we proceeded with another leg higher over the next two months ending yesterday (May 20) up 33% from the bottom having recovered about two-thirds of the losses. The dotted gray lines mark percent retracement of the initial drop in points. For example, we are just past the 60% line meaning that we reclaimed 64% of the losses so far.

I will be the first to admit that it’s very difficult to make sense of why the market has had such a strong bounce in the face of very negative economic news flow driven by COVID-19 shutdowns. Exhibit 2 shows just a sampling of some of the big negative releases since the bottom on March 23. Confusingly, market went up on most of those “unprecedented” days. There is a lot of talk of the “market is forward-looking” and “market is not the economy”. Both of which are true but don’t make it any easier to process such incongruous behavior. That’s why we strongly discourage trying to time the market based on news (as communicated in numerous updates during the selloff). Even if you know what the news will be, guessing how the market will react to it is nearly impossible! 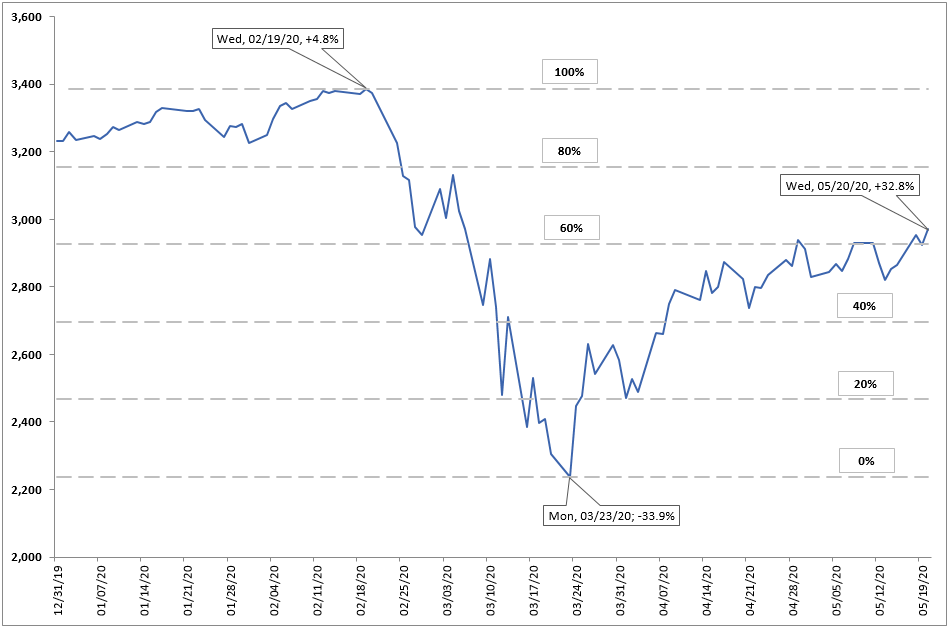 I also wanted to take a look at the performance of some asset categories during the selloff and the subsequent recovery.

• Oil got crushed into and after the bottom. In a bizarre twist having to do with storage capacity and technical commodity trading issues, it actually traded at a negative $37 for a few hours on April 20!
• The selloff affected stocks of all types, particularly small and foreign
• NASDAQ index driven by large growth stocks like Amazon, Google and Microsoft is actually up 9% for the year!
• The only things that went up during the rout were government bonds and U.S. dollar, even gold dropped (although it’s doing quite well YTD) 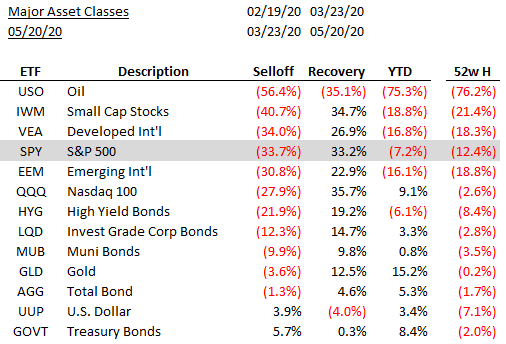 • Oil-related industries got absolutely crushed and remain significantly negative even after the bounce
• Other economically-sensitive sectors like homebuilders and financials were hit especially hard
• Real estate, which is often viewed as a safer income-oriented stock area, lost 41% at the worst
• Even utilities did worse than the market
• Various healthcare, technology and consumer staples areas had relatively smaller losses 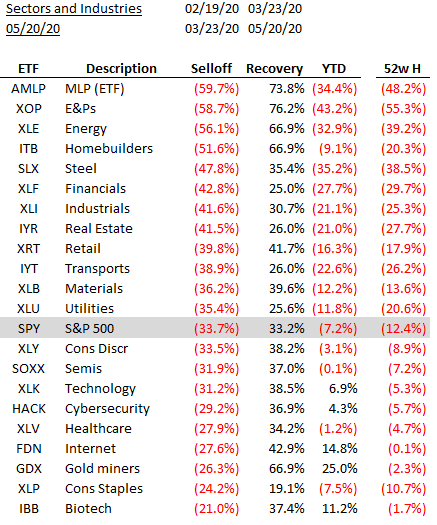 • Various Latin American and European countries led the list of biggest losers in International stocks
• As bad as things got in US, S&P was one of the better places to be with the exception of China (which is ironic given where Coronavirus started) 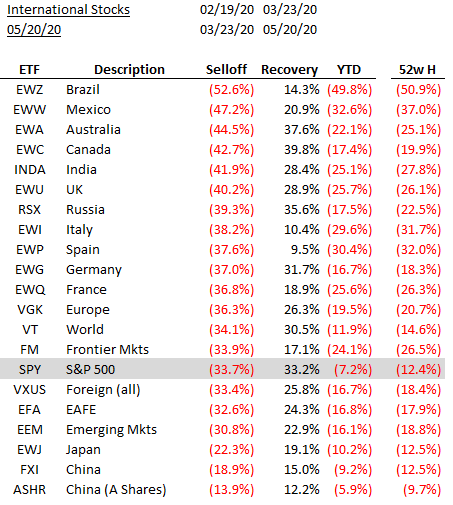 · In the bond land riskier and equity-like instruments got absolutely crushed in the initial selloff, although some have had a strong bounce
· Even high-quality corporate and muni bonds had a tough time until Fed stepped in to stabilize the bond market
· Driven by flight to safety, the only areas that went up during the panic were various maturities of Treasury bonds. Long Treasury did a phenomenal job of diversifying equity risk.
· Our bond exposure remains largely in high-quality areas that have held up well
· I discussed these fixed income patterns typical in market drops in a post last year 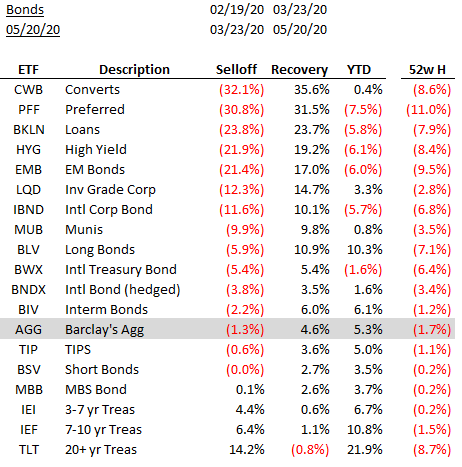