Along with the rise in overall passive investing on the rise (Exhibit 1), domestic equity space has seen a large increase in indexing. I decided to do a series of posts looking at various index options. I will start with a deep(-ish) dive into the available broad market index funds. By the way, S&P 500 is NOT a broad market index – it’s a managed index of 500 large companies and excludes over 2,500 other stocks available in broader indices. And don’t even get me started on Dow 30 as a market benchmark! 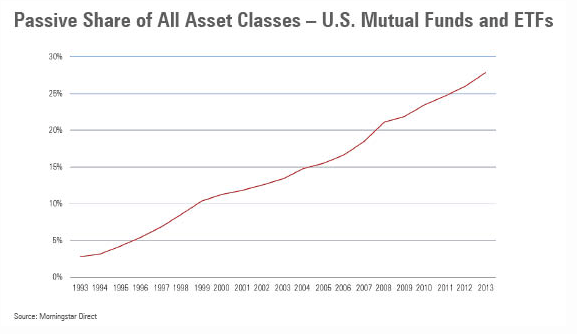 Let’s say you have read many articles on Morningstar, Vanguard and lots of other sites that convinced you that indexing your domestic stocks is a way to go (trust me, it is). You decided to replace your actively-managed funds with a broad market index and be done with it. So what is the best option to use and why?

Exhibit 2 shows most of the major ways to buy the entire U.S. stock market in one fund. There are several sub-sections in the spreadsheet. Major ETFs represent large funds tracking four main indices. Other ETFs are shown for reference, they wouldn’t be my first choices. Interestingly, iShares has FOUR different broad market ETFs tracking different indices. Seems a bit overdone to me, but that’s why I’m not an important fund company executive. Also, there are two other Russell 3000 funds from SPDR and Vanguard, but iShares version remains the biggest one despite having higher expense ratio.

I also showed a couple of major open-ended mutual funds that represent the total stock market. VTSAX is a different share class of VTI (note that AUM for VTI represents ETF share class only). Just to be thorough, I also included two funds from Dimensional Fund Advisors. They are not index funds per se – they use custom benchmarks that overweigh small cap and value stocks based on academic research. I might do a separate DFA post at some point, but this article will focus on funds that track actual commercial indices. 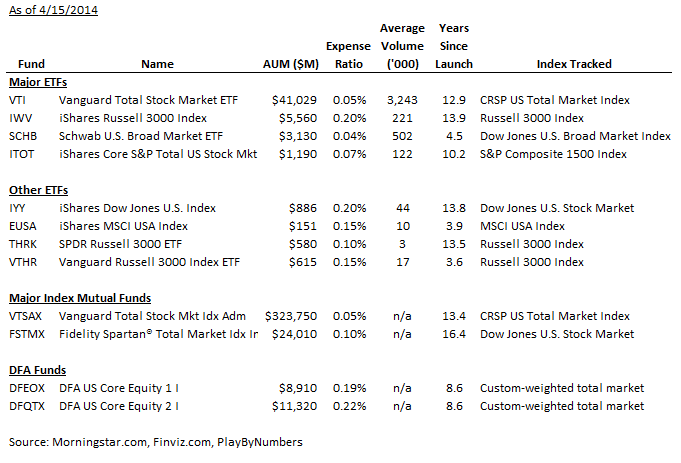 Below is a brief overview of the metrics relevant to index fund selection:

Expense Ratio – This one is pretty simple – lower is better!

Average Volume – ETFs (as opposed to mutual funds) are traded intraday, so you want to pay attention to how liquid they are. Personally, I wouldn’t use market orders on anything that trades less than 100,000 shares a day (200,000 just to be safe with all those high-frequency traders – 60 Minutes anyone?).

Years Since Launch – Shows an established fund, although new funds are not necessarily bad – Schwab products are solid choices

Benchmark Index – Note that fund companies listed above maintain arm’s-length relationships with index providers. They license the right to use the index name and track its holdings.

There are five primary U.S. index providers represented. Standard & Poors is a well-known index shop as is Dow Jones. Interestingly, these two formed a joint venture in 2010 and their indices are part of the same business now.

The Russell 3000 Index measures the performance of the largest 3,000 U.S. companies representing approximately 98% of the investable U.S. equity market.

MSCI is a provider more known for its International indices. Moreover, MSCI USA is really a large cap index as opposed to the broad market as it has no exposure to small stocks.

CRSP is affiliated with the Booth School of Business at the University of Chicago. Historically, they were geared towards academic community instead of commercial index products. But that all changed when Vanguard (the largest index shop) switched their domestic funds to CRSP in 2013. In fact, Vanguard changed their index providers several times recently: “Dow Jones U.S. Total Stock Market Index (formerly known as the Dow Jones Wilshire 5000 Index) through April 22, 2005; MSCI US Broad Market Index through June 2, 2013; and CRSP US Total Market Index thereafter.”

From investor’s perspective, the actual underlying index is not too important as long as it’s broad enough, but some index providers charge high fees that lead to higher fund expense ratios (see Vanguard’s VTI vs VTHR).

Now let’s take a look at some portfolio composition metrics and historical returns for these funds (Exhibit 3). 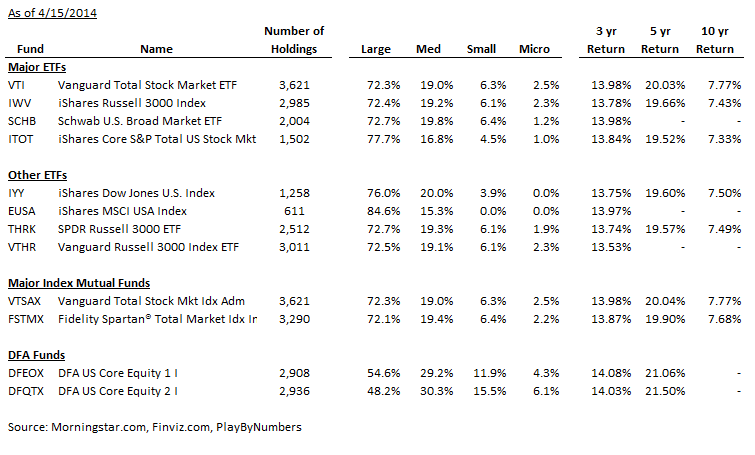 Number of Holdings – In a broad market index you want as many positions as possible, while still remaining practical to manage. Thus VTI and IWV are great choices and EUSA not so much.

Another thing to note is index sampling – i.e. holding “representative” securities that get the returns “close enough” to the underlying index. For example, THRK’s benchmark is composed of 3000 companies, but the fund has only 2,512 holdings. Similarly, SCHB has 2,000 holding vs 2,500 in its benchmark. Sampling, if done well, keeps costs low by reducing the fund’s transactions.

Composition by Market Cap – related to last datapoint. You DO want significant exposure to small and micro caps since they tend to outperform larger companies over time. The top three major ETFs are very comparable in this metric.

After reviewing the metrics above, Vanguard’s VTI is a clear winner with Schwab a close (albeit less established) second:

Expense ratio – check (although its 1 basis point higher than Schwab).

AUM – by far the largest asset base, all those people can’t be that stupid

Volume – over 3 million shares a day, unless you are trading billions of dollars you won’t move the spread

Time in existence – the fund has been around for almost 13 years and Vanguard has been managed indexed funds since 1970s.

Small & Micro caps – related to last datapoint, VTI has a largest exposure to smallest companies (aside from DFA that is)

Historical Performance – best index fund returns over all timeframes (again DFA is better but with quite a bit more risk). Largely due to very low expenses, but the performance advantage holds even after adjusting for expense ratios.