Recently I have come across an interesting example of the ETF industry catering to the “needs” of the investing public.

There has been a number of high-profile security breaches in the past few months, including Home Depot , J.P. Morgan Chase and Target. To address the growing concern about cyber security and provide an investment vehicle for it, a tiny ETF company launched PureFunds ISE Cyber Security ETF (HACK) on November 12, 2014.

Then two weeks later, Sony Pictures was hacked and the story received a huge amount of media coverage. Adding fuel to the fire, in early February 2015, there was a major data breach at a number two U.S. health insurer Anthem – it involved a database containing personal info about 80 million customers. Furthermore, President Obama addressed cyber threats extensively in his State of the Union Address and then led a cyber-security summit at Stanford University.

There is plenty of long-term potential for the companies in the index – according to PureFunds, each year cyber security incidents cost the global economy $400 billion and the rate of such incidents has been growing at a compound annual growth rate of 66% since 2009. J.P. Morgan Chase alone plans to double its annual cyber security spending to $500 million within the next five years.

With all this attention, ETF is up 16.8% from its launch compared to +4.5% for the S&P 500 (Exhibit 1). Lest you get all excited and plow into the fund, this is a very short track record. As a cautionary tale, take a look at how HACK’s largest holding has behaved since its IPO in September 2013 (Exhibit 2). FireEye Inc (FEYE) started out strong driven by wild optimism about future growth and the post-IPO return reached 165% by March 2014. Then as the excitement died down, it came back to earth and is currently neck-in-neck with the S&P 500. Keep in mind that this is a company that is growing revenues at triple digit rates, but still loses money every quarter. The point I’m trying to make is don’t get carried away with this exciting space. 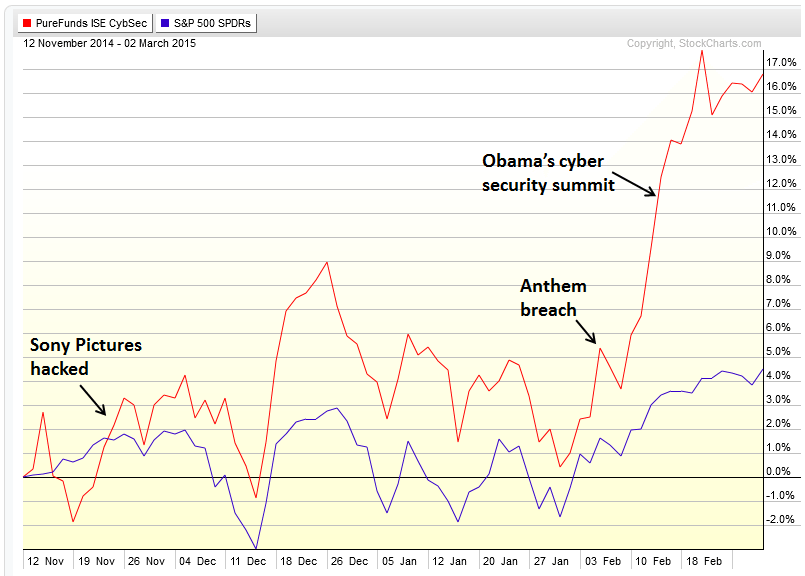 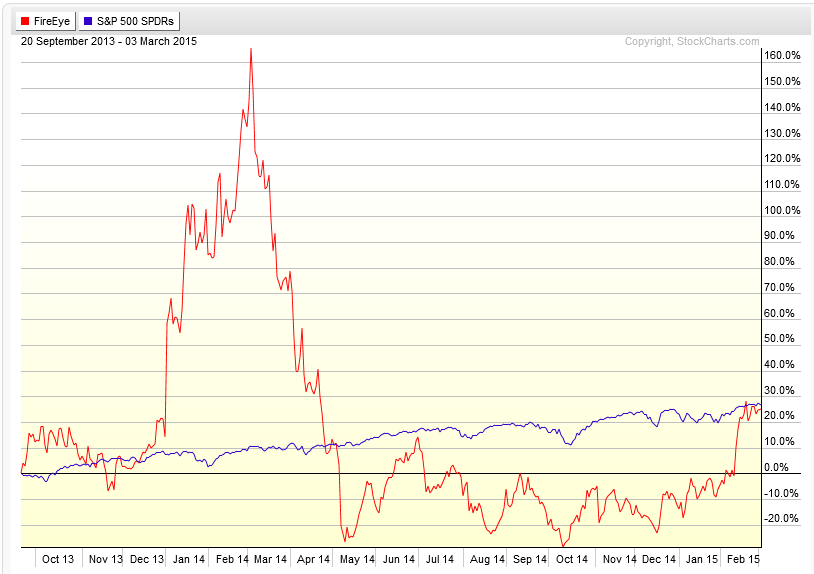 We have seen this tale many times before – most recently with companies involved in solar energy, social media, and biotech. What I find more interesting is the business case for the ETF itself. From that perspective, PureFunds has hit a jackpot with a fashionable little corner of the market. I collected a history of Assets Under Management (AUM) figures for the fund from various news articles and press releases. Exhibit 3 shows how AUM has skyrocketed with each news story. It reached $100m in early January, just 55 days after launch. It has been going up in leaps and bounds (literally) and has almost doubled in the last two weeks alone! That is quite remarkable for a niche sector ETF sponsored by a tiny upstart. Good for them though, a little initiative and luck will still get you places in this business. With current AUM PureFunds stands to make over $3 million a year on the management fees – not bad for a few guys in Jersey. 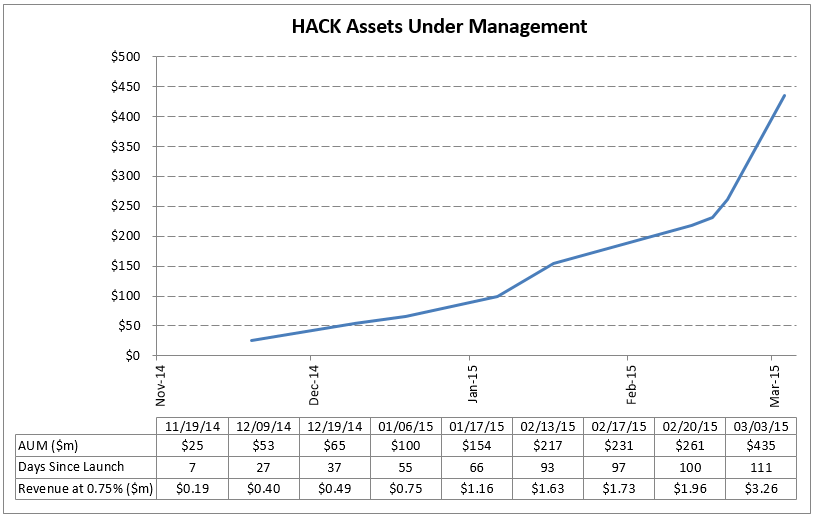 Apparently, HACK has been in the making for couple of years. The universe of companies needed to grow to support market cap and trading volume for an ETF. The fund is currently composed of 31 stocks, mostly from USA and Israel and is dominated by small / micro-cap companies. Keep in mind that this space is still a tiny niche. All of the U.S.-based companies in the fund weigh in at only 0.95% of the Total U.S. Stock Market and 0.65% of that is due to CSCO alone.

You can find detailed stats on ETF.com’s Fund Report – it’s my new favorite source of data on ETFs.

I plan on doing a series of posts based on their fund database to analyze recent ETF launches and industry trends.