Index funds which mimic a certain market, as opposed to fund managers trying to pick “winners”, have soared in popularity. Their objectives are generally easy to understand and they have relatively low operating expenses. And they are available in the traditional mutual fund version or as exchange-traded funds (ETF’s) which have the same objective and portfolio as a traditional mutual fund but trade like stocks.

Let’s assume that you want to overweight mid-sized and small companies compared to the overall market because you have learned that they outperform large companies over the long run (albeit with increased risk). You also want to be able to see how the underlying portfolios overlap and to make adjustments between the categories.

Leave it to financial services to take the most sound and basic idea and complicate it.

Investment companies offering index funds rely on outside research firms to develop and maintain the underlying indices. For example, CRSP (the index provider for most Vanguard stock ETFs) has done a great job describing various ways to split the stock market into size groups. Basically, you can slice the total market into either Two-Tier: Large + Small or Three-Tier: Large + Mid + Small. Of course ever-obliging ETF providers responded to investor demand by offering midcap options for even two-tier indexes. This proliferation and the sheer number of ETFs based on company market value has created a confusing mess that we’ll attempt to decipher below.

Exhibit 1 shows available index funds with important characteristics such as size (AUM), operating expenses, trading activity (volume) and company size. Annual Turnover % indicates how often the fund changes its holdings and serves as a proxy for tax-efficiency and other hidden costs. Naturally, broad index funds have the lowest turnover while small and midcap ones make a lot of portfolio changes. The ETFs are grouped by offering firm and index provider. 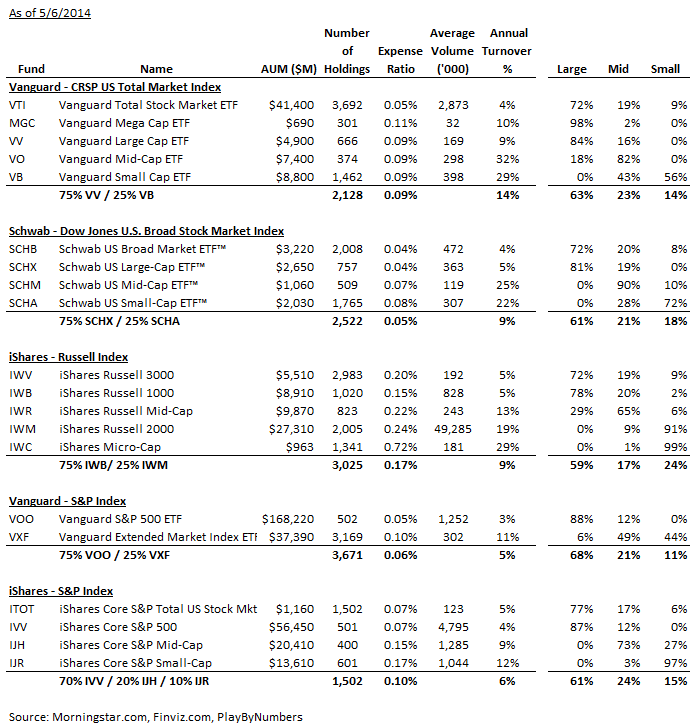 Exhibit 2 puts the same line-up into visual form to see how they fit together. It is built to scale based on a number of holdings in each ETF (3,500 being the highest – so there are 35 “segments” of 100 stocks each) rather than reflecting market value. One caveat is that the number of companies in the fund doesn’t reflect its true diversification. For example, ITOT’s 1,500 holdings is only 40% of VTI’s 3,700 stocks yet it still covers approximately 90% of the U.S. market capitalization. 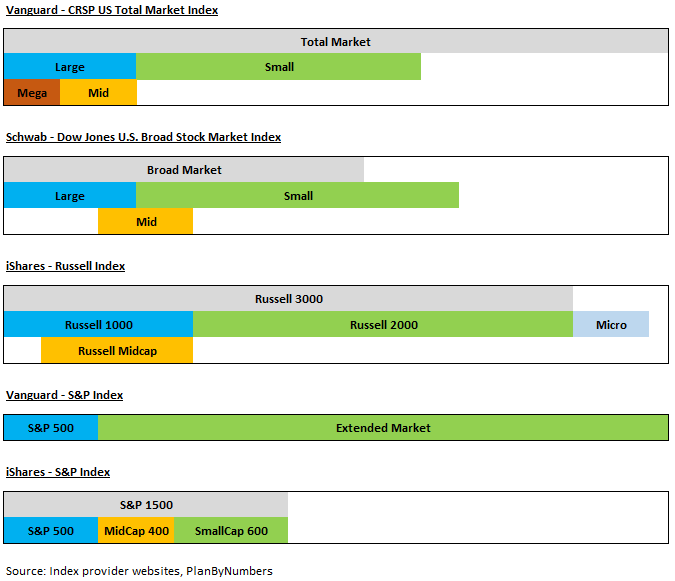 Now, let’s review the data for each family.

The one potential point of caution: If investors combine CRSP Large + CRSP Mid + CRSP Small, they have an overweight position in mid-cap stocks since large is already made up of Mega + Mid.

This point in bold is very important. This combination occurs in quite a few portfolios and seems logical based on the fund names. Let’s say your goal was to overweight smaller companies and you allocated 60% to large, 25% to mid and 15% to small. The resulting portfolio would double up on midcaps and actually be 55% large, 37% mid and only 8% small.

Note that Vanguard’s high turnover ratio has to do with switching index benchmarks from MSCI to CRSP in 2013. Turnover was much lower before the change and it should be lower in the future.

This is a solid offering, but once again you have to be careful with the midcap component (Exhibit 2). It actually overlaps both large and small funds and is not necessary to create a total market portfolio. Gordian Advisors typically uses 75% SCHX / 25% SCHA for broad US equity exposure– it’s very cheap (0.05% annual expense ratio for the combo), the funds are very sensibly constructed and there are no transaction costs at Schwab.

Despite being the most expensive option, this is another popular stable of funds with great market coverage. The midcap fund is once more superfluous and completely overlaps with Russell 1000. Unique to this line-up, Russell offers a micro-cap option (IWC) if you are interested in the very smallest public companies out there. Be careful though as IWC has a high expense ratio and can run into liquidity issues with some of its holdings, which could mean higher transaction costs.

This is an elegant two-fund solution that covers the TOTAL stock market with the highest number of holdings in our combinations. It’s also quite cheap and has very low turnover. Note that unless you want to adjust the weighting of the S&P 500 or Extended Market, the same result can be obtained with just the Vanguard Total Stock Market ETF.

The S&P index scheme is probably the best-known to the general investing public. It’s the only clean three-tier option out there and is a decent choice despite the relatively low number of holdings. Interestingly, turnover is much lower here as the indexes are managed by committee and not quantitative rules. Also note that SPDR has competing offerings with SPY, MDY and SLY but not a total market option.

It is very common that real-life portfolios mix funds from different providers in an attempt to cobble together “total market” exposure. Investors look at the fund names and assume that large, mid and small funds are exactly that and are interchangeable. Exhibit 3 shows several examples of this creative splicing. Clearly there are lots of gaps and overlaps!

The second example is a very common one, since SPDR S&P 500 (SPY) and iShares Russell 2000 (IWM) are synonymous with large and small cap stocks, respectively. In fact, among all ETFs they are number one (112 million shares per day) and number three (48 million) by average trading volume (EEM, an emerging markets ETF, is number two in case you were wondering). So let’s take a quick look at the results of combining these two together instead of using Russell 1000 and Russell 2000 together (Exhibit 4). You would miss out on a number of well-known names such as Las Vegas Sands, Tesla and LinkedIn (although you might be happy to be out of TSLA since the stock fell 60% in May from its high before slightly recovering). Moreover, the top names in S&P 500 would be overweighted relative to Russell 1000. (The same result would occur using VOO or IVV, the other S&P 500 funds listed in Exhibit 1.) 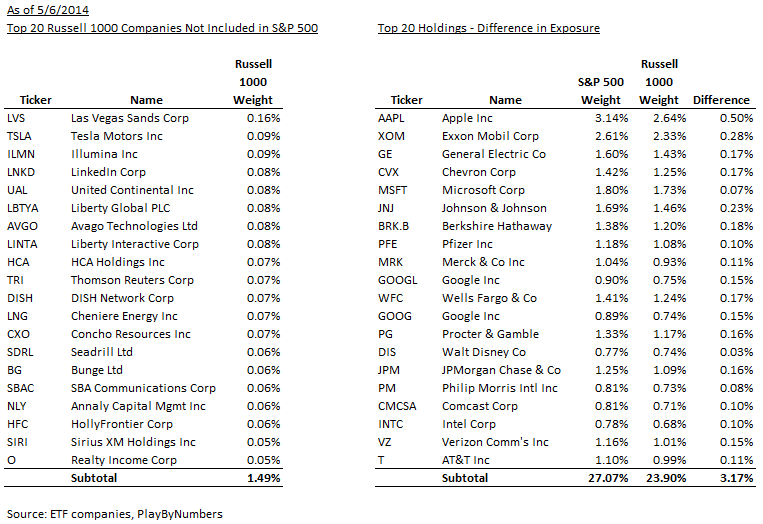 Like any other investment or tool, index funds are most effective when used properly. Be sure to understand if the underlying index uses two or three tiers to cover the market so you don’t overlap categories. Avoid mixing index providers by picking one provider (and one underlying index method) and stick with it. Finally, be aware of the funds’ expense ratios, number of holdings and turnover.