We are just wrapping up the earnings season for the second quarter where companies report their quarterly results.  I found it unsettling to see some of the revenue drops numbers and thought I’d share a few tables.

Just to define what I mean by fundamental numbers, Exhibit 1 has four examples. Delta Air Lines had revenue of $11.5 billion in the second quarter of 2019. It then dropped to only $786 in Q2 2020. That’s a 93% decline! However, its expenses declined by just 36% to $6.5 billion. They still had to pay employees, rent on office building and airport gates, as well as the regular expenses on flying planes despite them being largely empty in the spring. This resulted in the net loss of $5.7 billion for the quarter. Same goes for the other 3 companies – huge revenue drops but slower expense declines leading to big losses. These large companies have the wherewithal to survive one, two, maybe three horrible quarters like this but beyond that even they would face viability questions.

Moving on to a broader sample, there were 38 companies in the S&P 500 with Q2 revenue decline of 50% or more! Their revenue growth (or rather declines) are shown in Exhibit 2 along with the stock returns from February 19 when COVID selloff started to September 9. It makes sense that concerts, cruise operators, hotels/casinos, airlines and travel sites are heavily represented. There was very little activity in those areas in April, May and June. Energy sector is also featured prominently. It had a double-whammy of “normal” COVID-related impact on energy demand and the added drag of the oil price war started by Saudi Arabia and Russia back in March of this year. There are couple of apparel manufacturers there too as consumers stopped buying clothes while staying at home. Auto companies also saw a big drop in Q2 sales as factories shut down and showrooms were largely empty.

I didn’t want to make the chart too busy, but there were further 34 companies with revenue declines between 30% and 50%. This list featured household names like Disney, Starbucks, Nike, and McDonalds along with a variety of industrial firms.

Of course, there were also winners in the COVID world. I subjectively picked some well-known companies that are doing well in Exhibit 3. There are the much-talked-about FANG/FAAMG names highlighted in green. There is a reason they are doing so well this year (and in the prior few years) – they all had a positive revenue growth with the exception of Alphabet (Google). Also on the list are a variety of home improvement and general retailers as well as consumer staple companies. Second part of the list shows select companies benefiting from stay at home & work from home dynamics. Zoom, Peloton and Etsy are all growing by triple digits and have the stratospheric price appreciation to show for it.

Just in case you were wondering, I also looked at Tesla which is up huge this year, but they actually had a 5% revenue decline in Q2 and didn’t make this list. 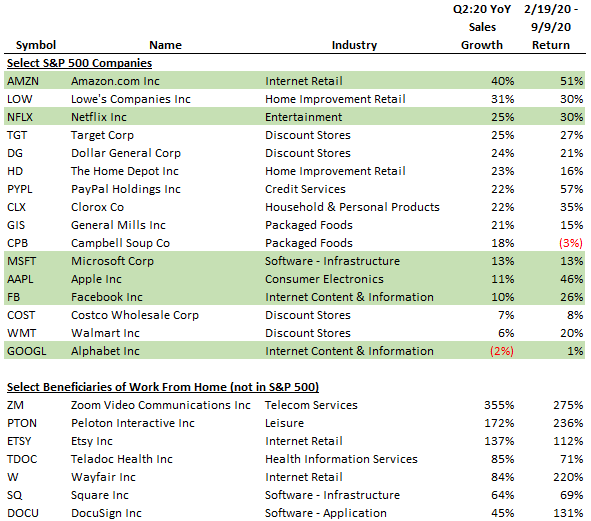 This is just one quarter and many of the companies in Exhibit 2 will survive and flourish in the future. Although a few (energy, cruises?!) will likely never regain their luster. Conversely, the uber-popular Zooms of the world are unlikely to live up to the hype and lofty expectations as things normalize and competitors move in. What COVID has really done is accelerated trends that were already playing out – move to online shopping, energy sector decline, demise of traditional retailers, etc. The largest bankruptcies of the year are heavily concentrated in the areas that were troubled even before the virus – link 1 and link 2.