In the past several years there has been a public outcry about escalating costs of college tuition. Obama administration even announced a plan last year to force universities to slow down cost increases or risk losing federal student aid. I have decided to take a closer look at the data in a three-post series. The first one will show how much it costs to get an undergrad degree now; then examine how fast it has grown over the past 30 years or so; and conclude with analyzing whether this growing investment in your future still makes financial sense.

Throughout the series I plan to focus on three schools: University of Michigan since it’s my Alma Mater (Go Blue!), University of Arizona as it is my adopted home school in Tucson (Go Cats!); and Harvard because, well, it’s Harvard!

So let’s take a look at what the current “sticker prices” are. Exhibit 1 shows tuition costs for 20-school sample of leading public universities. They are ranked by Out of State tuition, which basically varies from $20,000 to $40,000 a year. In State costs are much more reasonable ranging from $6,200 to $17,000. Out of State students typically pay about three times as much as their In State classmates, with a broad range from 1.5x in MN to 4.6x in FL. In the past ten years the In State costs more than doubled (+7.4% annualized), while non-resident tuition increased by 83% or 6.2% annually. 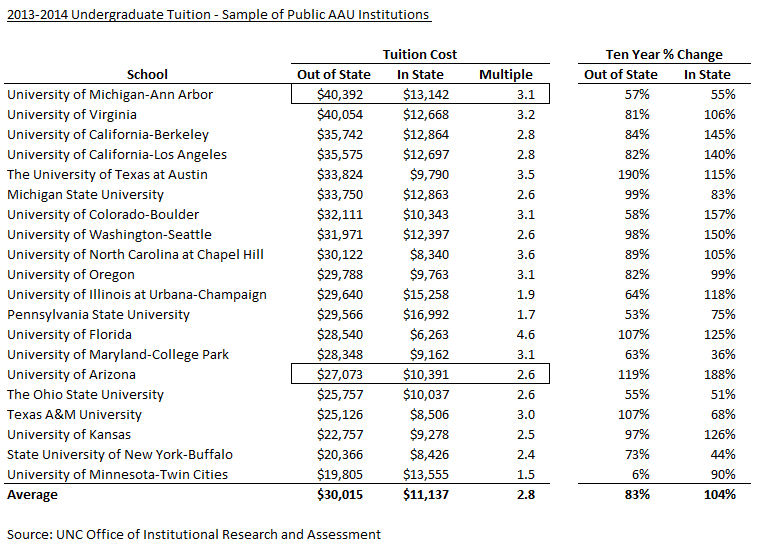 Exhibit 2 has the same data for the Ivy Leagues schools – I use this group to represent elite private universities. I don’t mean to snub Stanford, small liberal arts schools and other great choices but this is the data I have. The average sticker price for Ivies is still 44% higher than out of state rates for their public competition. However, the rates have been increasing much slower at “only” 3.8% per year. 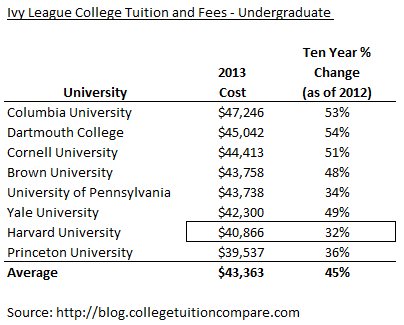 There are several reasons for rapidly rising costs at public universities (administrators galore!). Chief among them is the declining support from their respective states. Exhibit 3 show a graphic from University of Michigan’s website. In 1960’s the state footed almost 80% of the bill but that has dropped to only 16% in 2013. The situation is quite similar in most other states and it has been exacerbated by the “Great Recession” and resulting deterioration in state finances all across the country. 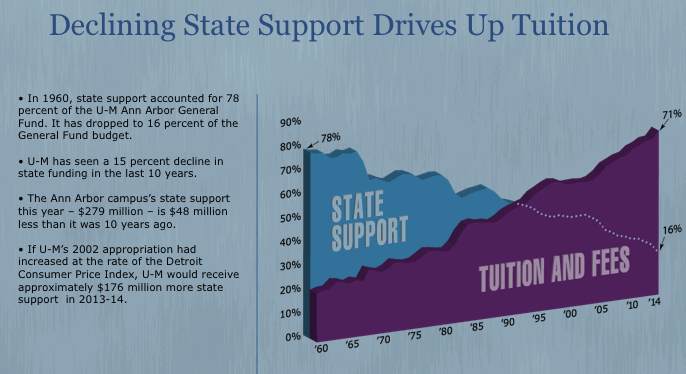 Don’t forget that these numbers do not include room and board, which currently runs $12,000 to $15,000 a year. Thus, four-year non-resident bill at a quality public university can easily top a quarter million dollars!

Now, there is quite a difference between the “sticker price” and what the students end up paying out of pocket. All universities have tuition assistance programs for lower and middle income families. Ivy League schools have made a big effort to make their education affordable. Given their huge endowments (relative to competition) they are able to offer much more assistance than the public schools. As shown in Exhibit 4, on average the students pay less than half of the headline price out of pocket. In fact, for many middle income families sending a kid to Harvard will cost much less than Michigan! 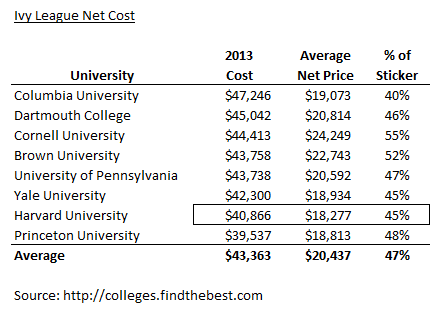 Next time we’ll take a look at longer term college cost inflation and compare it to other important metrics.