With Federal Reserve’s campaign of raising interest rates well under way, concerns abound about its implications for the   fixed income investments.  I’m going to do a series of posts looking at the modern bond market dynamics and their implications for investment portfolios.

First off, let’s explore the composition of the investment-grade bond market in this country. The best-known and widely-benchmarked fixed income index is Bloomberg Barclays US Aggregate Bond Index or The AGG. Originally  it was created in 1986 as the Lehman AGG and became Barclays AGG after Lehman Brothers collapse during the financial crisis. Here are the main criteria for inclusion in the index:

Side note: Believe  it or not, there are a few 100-year bonds in the index (such as those issued by the railroad company Norfolk Southern) and a bunch of 50-year ones!

Now let’s apply the above criteria and see what we get when you invest in one of the AGG-based index funds. Exhibit 1 shows the holdings of iShares Core US Aggregate Bond ETF (AGG) broken down by the issuer type. There are 3 main categories:

Securitized (don’t feel bad if your eyes glaze over here)

Corporate – this is debt issued by businesses. Industrial category is sort of catch all, but I plan to dig into it in another post to see what type of companies have the most debt. 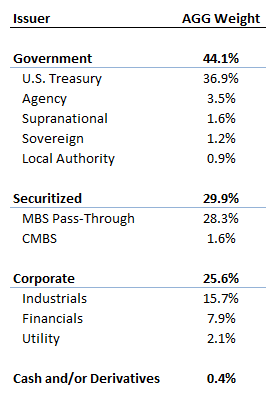 Before I let you go, I also wanted to address one of the biggest knocks against indexing bonds – too much exposure to Uncle Sam. It is true that roughly 70% of the AGG is some sort of government-related debt, be it Tresuaries, Agencies or mortgage bonds guaranteed by GSE. Only about 30% is backed by corporate issuers (i.e. the real economy). However, this has been the case for much of the past 40 years as shown in Exhibit 2 (or 5 using this borrowed chart). The index started out in late 70’s split roughly 50/50 between government and corporates but quickly evolved closer to the current composition. In fact, corporate exposure has been growing since the financial crisis as companies took advantage of the low interest rates to finance mergers and stock buybacks.