In the last post I presented an overall Bond Market Overview. In this article I will continue that analysis by putting it in context with dollar figures and growth statistics. As shown in Exhibit 1 U.S. Bond Market now stands at $40 trillion, compared to $27 trillion for the stock market and $18.5 trillion for annual GDP. If we compare current numbers with 2007 (just prior to the Great Recession), both stock and bond markets have grown by about 35% which is slightly above growth of the economy. As compared to GDP, both went up only slightly to 212% for debt and 147% for stocks. These numbers don’t seem to support some of the dire assertions out there that we are digging ourselves into a giant debt hole. One interesting side note: U.S. stocks increased from 33% of the global market to 42% during that period – very large jump driven by massive outperformance. 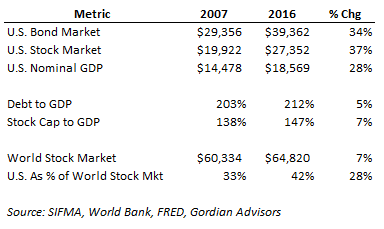 Exhibit 2 drills down into the domestic bonds. Note that this breakdown is slightly different from the Exhibit 1 in the last post since it includes securities that are not in the AGG (munis, high yield, money markets, etc). It’s interesting to see that most of the issuer types saw outstanding debt decline with the exception of Treasuries (more than tripled!), Corporates, and (slightly) Municipals. So both governments and businesses have been able to take advantage of low borrowing costs. 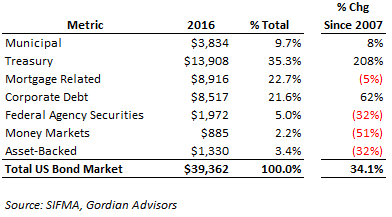 Related to the prior point, here is the annual issuance of new debt by borrower type (Exhibit 3). Big drops in Agency and Asset-Backed (autos, credit cards, HELOC) were offset by a ramp up in Treasuries and Corporates. While there is a lot of movement among categories, overall U.S. debt issuance in dollar terms has been pretty steady since 2003 (Exhibit 4). In fact, if we adjust for the growing market size, overall issuance as % of bonds outstanding has been on a steady decline since then (Exhibit 4, panel 2). 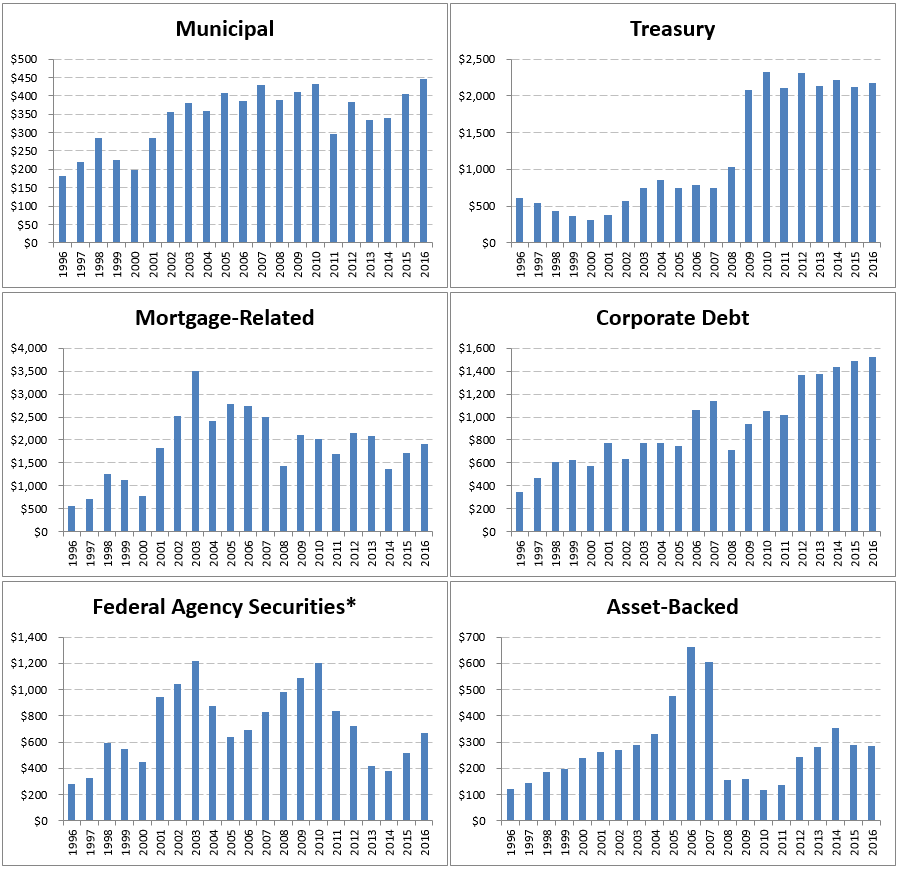 Bond market is growing roughly in-line with the economy and in its current state doesn’t seem to portend any impending catastrophes. U.S. Government has been borrowing heavily driven partly by budget deficits, but more importantly ballooning Fed balance sheet. Now that Federal Reserve announced its plans for reducing Treasury (and MBS) holdings, market growth should slow down significantly. Unless, of course, tax reforms create higher budget deficits, but I don’t even want to open THAT can of worms….