I’ve been following Arizona’s COVID numbers very closely and decided to do some analysis on the state’s baseline vital statistics to put this epidemic in perspective. Here are some stats you might find useful and interesting.

First off, let’s set the stage for the differences among the state’s 15 counties (Exhibit 1). Arizona’s 7.2 million population is unevenly distributed with 4.4 million in Maricopa and 1 million in Pima county. The two counties account for 75% of the state’s population, so to keep things manageable I’ll focus the analysis on three entities:  Arizona overall, Maricopa (Phoenix metro) and Pima (Tucson metro). As an aside, Arizona ranks number 14 in population, top three states of CA, TX and FL have 3 to 5 times as many people. 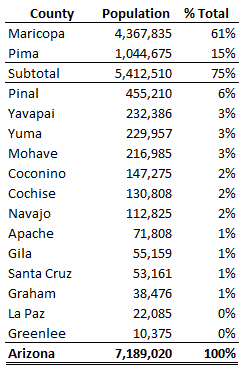 So what are the moving parts in year-to-year change in Arizona’s population? We started 2019 with 7.08 million people, there were 79 thousand births (or 1.1%) and 60 thousand deaths (or 0.8%) – Exhibit 2. We ended the year with 7.19 million, so there was a net out-of-state migration of 93,559 to make up the difference in local dynamics. In Pima county we’ve had roughly 10,000 each of births, deaths, and net migration (out of state or from other counties). It was interesting for me to break it out by month and even day – so every single day in our relatively small city we have 28 births and 27 deaths from various causes (more on that later). We also have 28 people moving into the county on an average day (256 people state-wide). 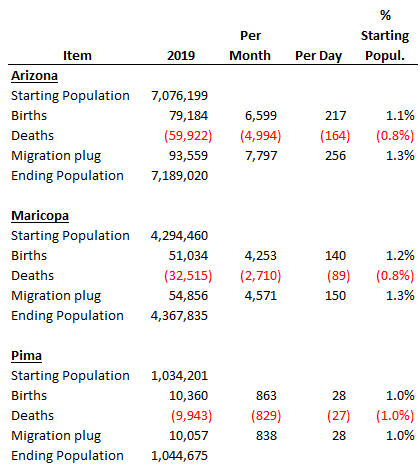 Now let’s add monthly death numbers available through June 2020 (Exhibit 3). To get a baseline for the “normal” number of deaths in any given month, I took the average of the past 3 years (2017-2019). There are some seasonality changes in the numbers with significant population of “winter visitors” living (and dying) here in certain months.  This is an admittedly unscientific analysis with a small sample size, but should give us a crude indication of what impact COVID is having in the past few months. In January, the number of deaths was normal in all three geographies, but starting in February it started to go up. Most prominently, the month of June saw an abnormal deaths increase of 1,553 people state-wide or 33% above average. Official COVID deaths for the state are shown in far right column. In May and June they accounted for 10% and 11% of all deaths, respectively. In June, 726 reported COVID deaths accounted for 47% of the 1,553 abnormal increase. I’m not going to speculate where the rest of it is coming from but it will become clearer at some point in the future. 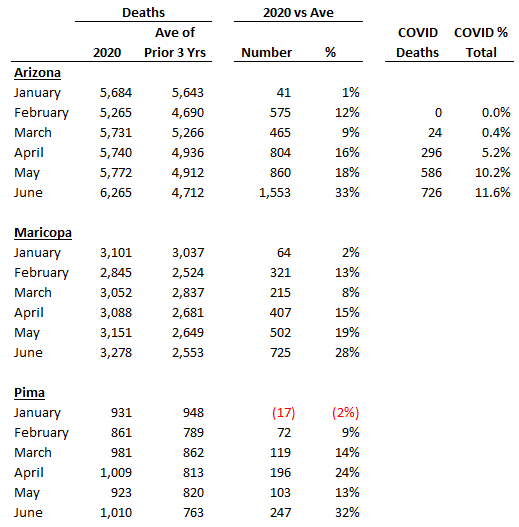 Exhibit 5 shows 2018 cancer deaths by type, with lung, colon and pancreatic the most deadly. Exhibit 6 breaks down deadly accidents by category. Drug overdoses were the leading cause of death, followed by falls and car accidents. Excessive heat and drowning each killed 90 people, while fires claimed 23 lives. Snakes, bees, dogs and other creatures caused a few deaths as well shown in “other” category. 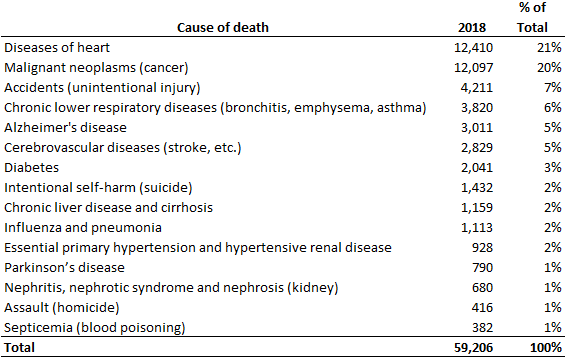 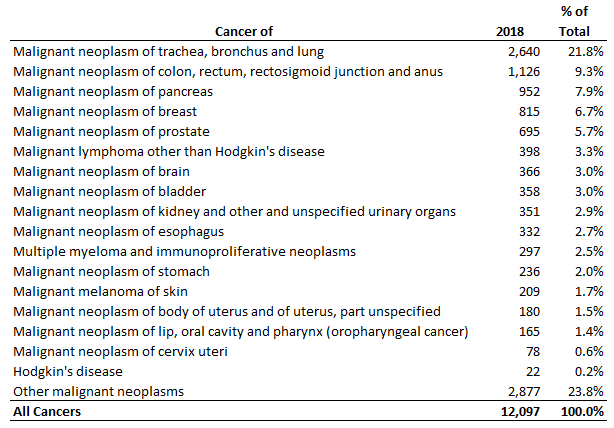 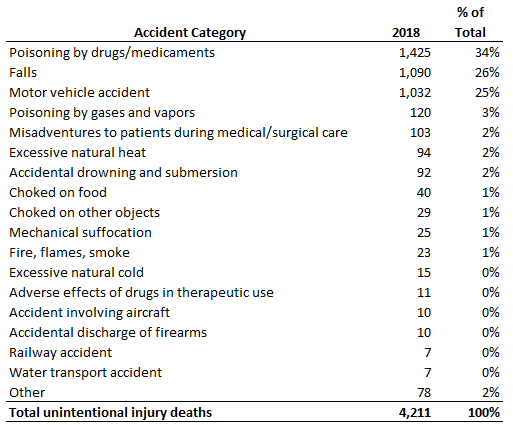 By the way, I also looked into monthly birth, divorce and marriage numbers. The births were at pretty much normal levels through May, but that’s to be expected given the obvious biological timeline of gestation. Both marriages and divorces were normal through March and then saw marked declines in April and May (last month available ). Marriages were down 34% in April and 50% in May relative to average of three prior years. Divorces were off by 48% and 40%, respectively. Only time will tell if there will be a post-quarantine baby boom or a divorce tsunami!