I got the idea for this post after reading two pieces of news/research today. The first one was Ben Carlson’s post on how investing styles go in and out of style (pun intended). And the second is really a series of articles about how weakness in Apple is dragging down the entire market (examples here and here). So I decided to create my own version of a periodic table of investment returns (or performance quilt) for the select high-flying stocks (Exhibit 1). I subjectively picked a few momentum darlings to see how consistent that have been since 2005. 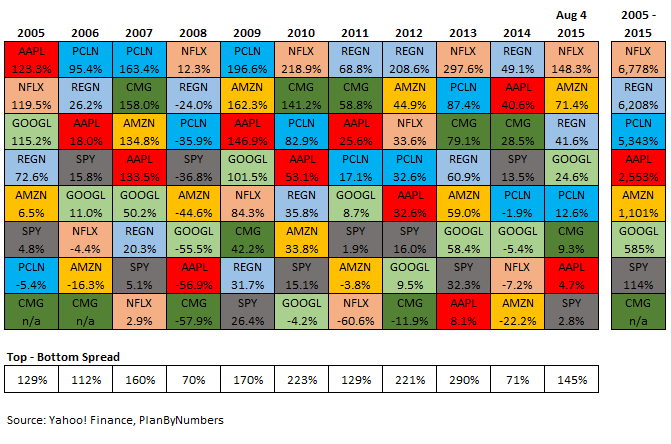 Here are some of my observations: 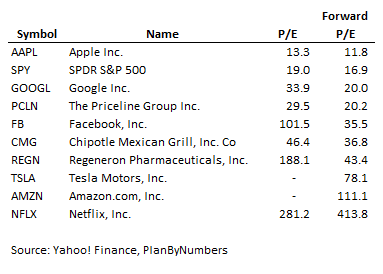 I was also curious what it looks like on a quarterly basis. I wanted to incorporate FB and TSLA in this analysis (they went public in 2012 and 2010, respectively). I replaced CMG and REGN with those two – so now we are focusing entirely on technology stocks. And I used QQQ instead of SPY for a more appropriate benchmark (Exhibit 2). You can draw your own conclusions here, but the above observations hold. 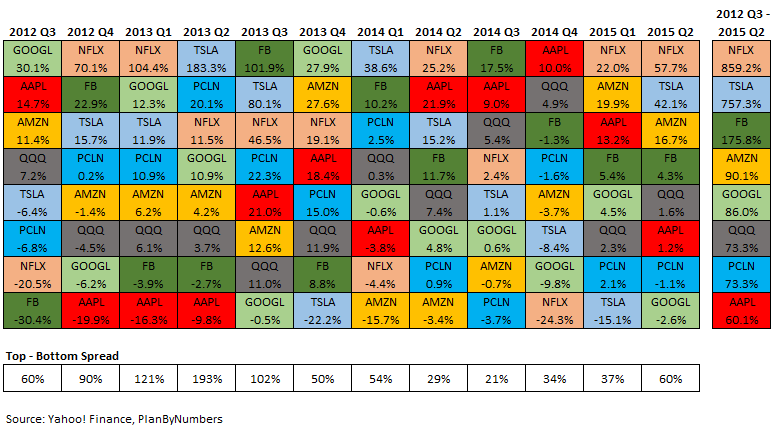 The moral of the story for me is that even elite stocks ebb and flow with the markets. It would be quite difficult to get in and out of them at the right times. That’s why I recommend buy-and-hold index investing as illustrated in a prior post: How Come I Don’t Have Any… Tesla, Netflix or Facebook? (02/20/2014). So just buy VTI (or any other broad market ETF) and ignore daily/weekly/monthly/quarterly volatility. Then turn off CNBC and go do something fun with your kids (or friends, or yourself)!

I love these performance quilts in general – they provide an easy way to see rotation within stocks, sectors or asset classes. Ben Carlson’s blog has a few more good ones. And while you’re there, check out his other posts – they are well written and researched.