I came across some fund data from Morningstar recently (Exhibit 1) and found some of it quite surprising and interesting.  The table includes U.S. open-end mutual funds and ETFs.

Exhibit 1 – Assets Under Management by Category ($ billions, May 2015) 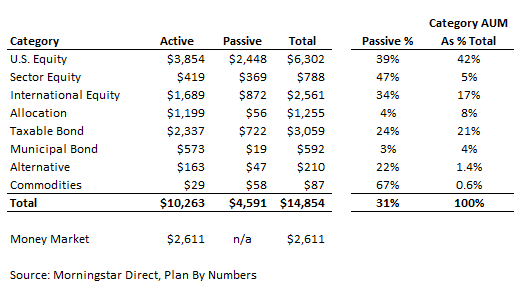 Here are my observations in no particular order:

In the next post I plan on digging into the recent flows in/out of these categories.

P.S. Stay a while and check out our new website! We spent the past few months working with a graphic designer and a developer, both of whom are very talented. The new site has a great modern look, is mobile-friendly and designed with our clients and readers in mind.  Make sure to look at those cute kid pictures on about page (hover over professional photos).