This time of the year I like to look through some of my performance spreadsheets to see how things are going in various investment areas. What a difference a year makes, here are some of my observations (all YTD Return numbers below are as of July 20, 2022).

S&P 500 made a new all-time high on January 3rd of this year and has been falling ever since. We did have some bounces in late March and early June, but then made a low (so far) of -23.5% on June 16. That means that we are officially in a bear market (defined as -20% off the top). Many observers also believe that the economy will go into a recession (or already is in one). We won’t know the recession part with certainty as it is a committee of economist that makes that determination and that call is typically many months behind the conditions on the ground. From the investor perspective, recession or not doesn’t really matter, it’s the painful price drops that make the difference in our portfolio values and mental wellbeing. 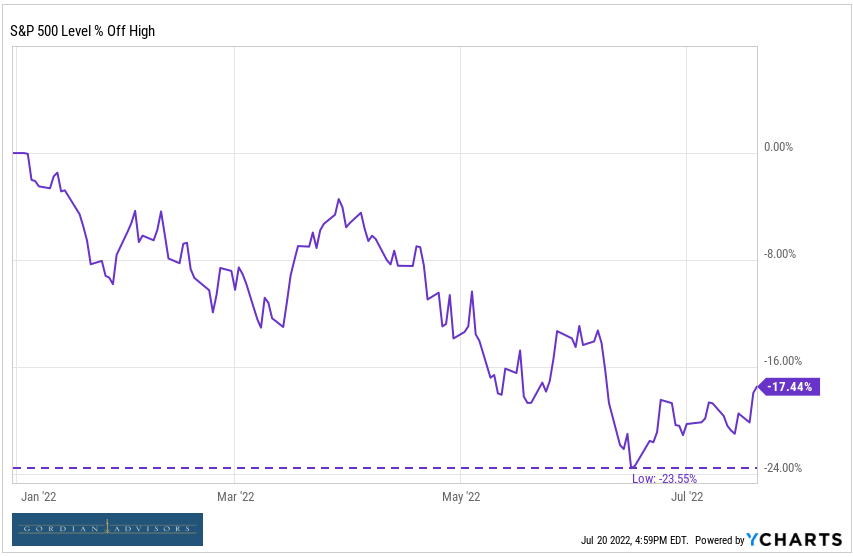 • With the exception of USD and oil, everything is down this year
• Bitcoin (and other crypto assets) is getting killed and is 65% off its high
• Stocks of all flavors sold off substantially led by NASDAQ and small caps
• Foreign stocks are down about the same as domestic ones
• Painfully, bonds are dropping in tandem with stocks as Fed is raising rates
• Gold hasn’t done well as an inflation hedge this year

• On the sector level, Internet stocks have done the worst led by Facebook, Netflix and PayPal with other pandemic winners giving up most of their gains
• Homebuilder are down 29%, which is surprising given the heated state of the housing market. Supply chain, labor issues and rising mortgage rates are at play here.
• Retail and other consumer discretionary stocks are selling off on fear of a slowdown in consumer spending
• The upside list is dominate by energy stocks as oil/gas price skyrocketed after Russian invasion of Ukraine
• Other defensive stocks are holding up ok too, reflecting recession fears 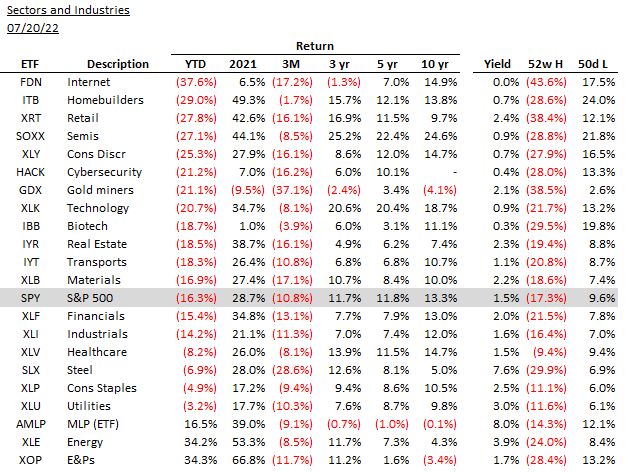 • Of the major countries Russia is down 80% as sanctions wrecked its economy and stock market. Realistically, it’s likely a 100% loss as Western stock holdings there are likely worth zero.
• Other European countries are also faring poorly since their economies face major disruptions with the war in Ukraine on top of “normal” issues like inflation, rising rates, etc.
• China and Japan are hurting as well
• Latin American countries are doing less bad and somehow the UK is holding up ok despite the political mess it’s in 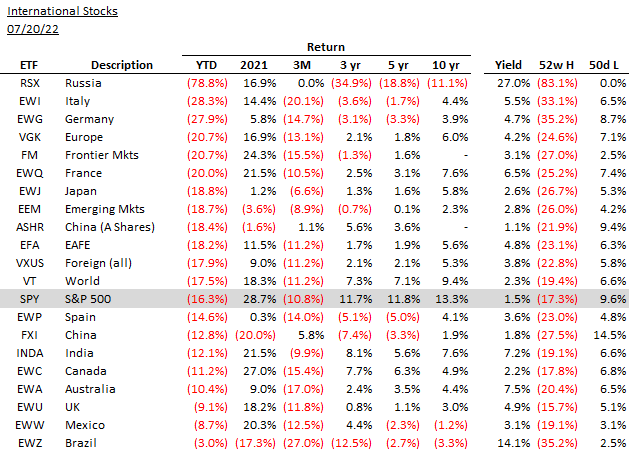 • Bond market is a hot mess this year driven by Federal Reserve’s aggressive rate rising campaign to tame runaway inflation
• Overall bond market (AGG) is down 10%, which is a very large move. Since its inception in 1976, the index has only had four negative years, the worst of which was -2.9% in 1994.
• Unfortunately, there is no place to hide with all major bond sectors in the red
• Long term bonds are down massive 20-30% (we have very little exposure here as we use short and intermediate bonds funds)
• Various International bonds are down around 20% underscoring that this is a global issue. Strong dollar also hurts them.
• Corporate bonds, convertibles and preferreds are doing poorly with bear market/recession concerns on top of rising rates
• TIPS, which are inflation-protected, are still selling off. It isn’t intuitive but does make sense given how their inflation adjustments work.
• Short-term bonds and Leveraged Loans (which feature adjustable interest rate) are the only places with less pain albeit still negative 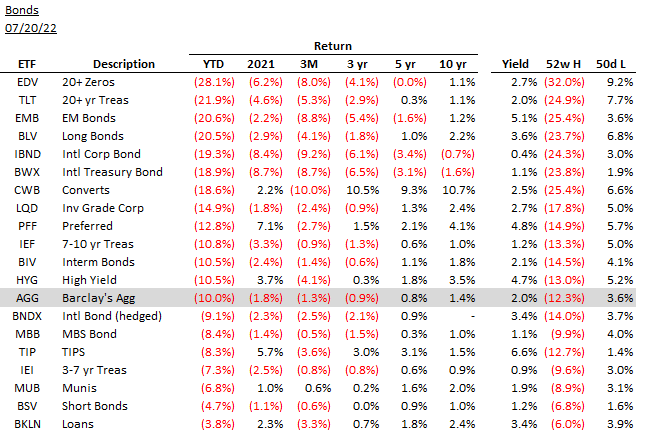