2019 was another eventful year (aren’t they all!). Exhibit 1 shows the weekly % changes in the S&P (green and red bars) and the level of the index (black line).  The annotations are the major stories of the year that [could have] affected the markets.  It’s not meant to be a comprehensive list, just my personal observations.

Most relevant for the markets, it was the year of tariffs wars, Brexit drama and Trump-related investigations and eventual impeachment vote in the House. Federal Reserve cut interest rates three times and the market soared in response. 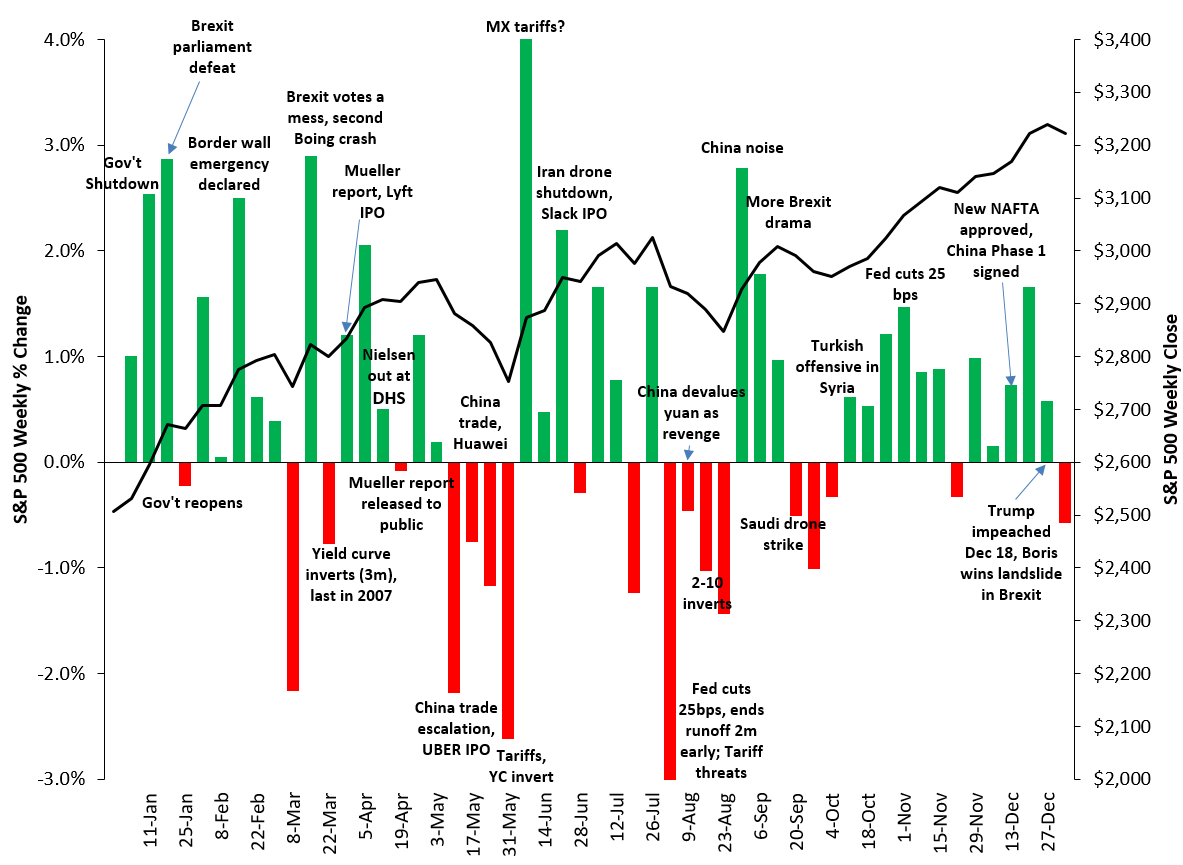 So how did all this turmoil affect the performance of major asset classes? Every single asset class had a positive year, with most posting healthy two-digit returns (Exhibit 2). Once again, US stocks were the best performers but their foreign  counterparts had respectable gains as well. Oil and gold did well also, while bonds had a great year (more below). Dollar had another positive year, but not as positive is it’s alleged currency competitor, Bitcoin. This being the end of the 2010’s decade, I posted 10-year return as well. Pretty good returns all-around but US stocks are quite impressive, specially the growthy Nasdaq ones. 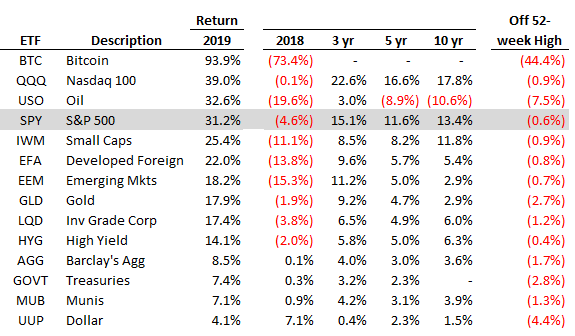 The market took off out of the gate and ran straight up until taking a breather in May (Exhibit 3). The largest pullback for SPY was 6.6% into late May, then on to new highs and another 6% pullback in August (Exhibit 4). All in all, it was a pretty smooth ride, pretty similar to 2013 and 2017. 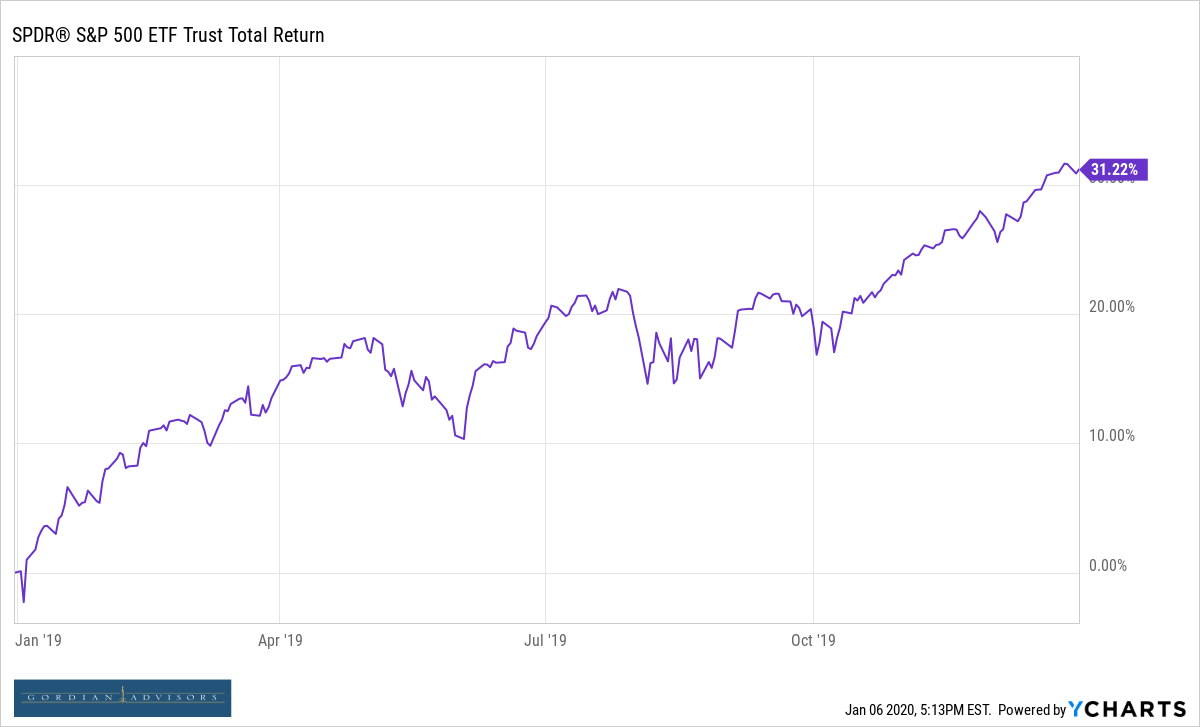 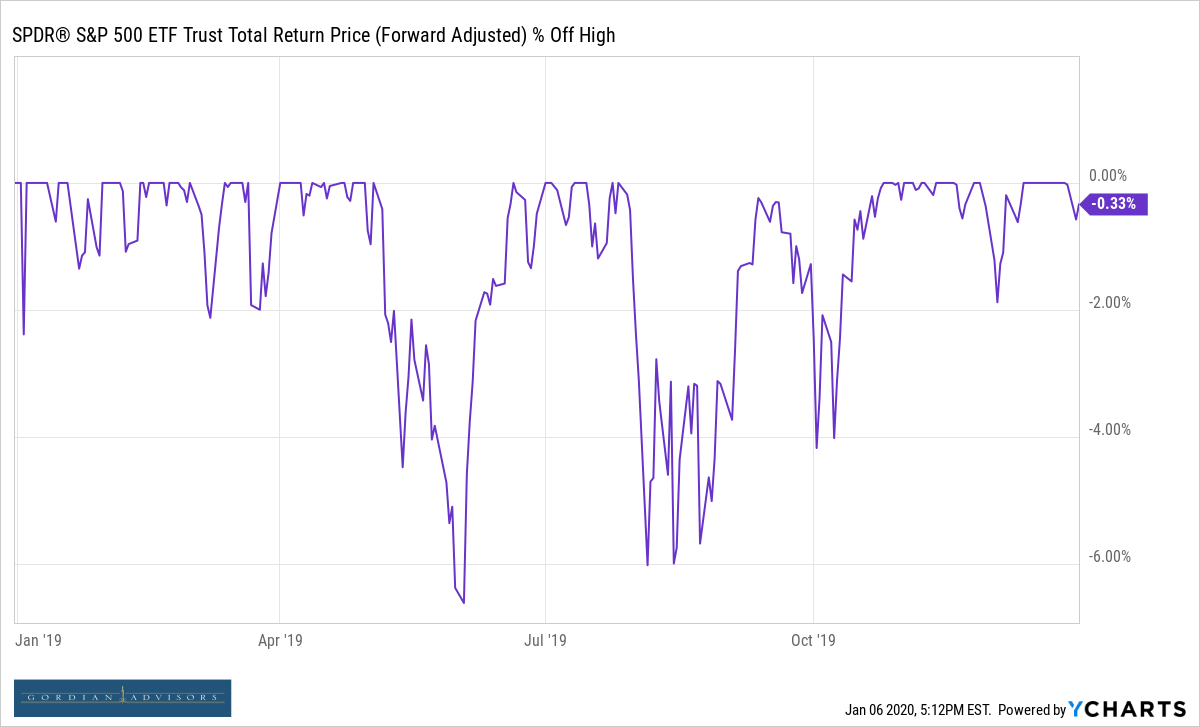 Switching gears to fixed income, it was a “monster year” in normally mild bond terms (Exhibit 5). All manner of corporate bonds did well, but treasuries also had a big year. The Aggregate Bond index was up 8.5%, the highest since 1998! Most of this exuberance can be attributed to Federal Reserve cutting interest rates three times in 2019. On a 10-year basis the returns in bond land were more subdued but still respectable (3.6% return on the AGG versus 1.7% inflation). 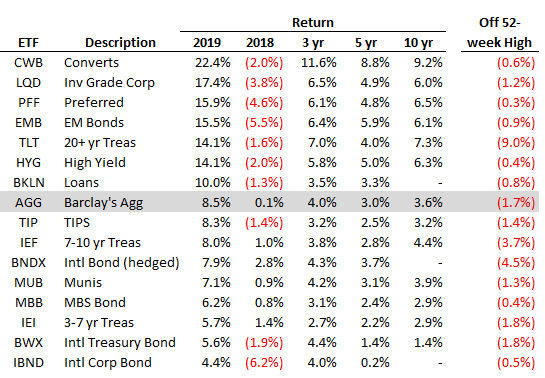