Now that full-year GDP numbers are out I can finish the 2019 year-in-review series by taking a look at major economic indicators. The employment situation continued to improve in 2019 (Exhibit 1).  The U.S. economy added 2.1 million new jobs (176,000 a month), which was a deceleration from 2.7 million in 2018.  Total employment increased 1.4% which was faster than the steady 0.6% population growth. The unemployment rate ended the year at 3.5%, which is well within the range of what Fed currently considers full employment.  Likewise, U-6 rate dropped to 6.7% – it’s a broader measure defined as “Total unemployed, plus all marginally attached workers plus total employed part time for economic reasons”. So the job market is very strong going into the election year.

U.S. GDP grew at a decent 2.3% rate but it was the lowest growth since 2016 (Exhibit 2).  Inflation as measured by CPI increased to 2.3%, still hovering around the 2% Fed target. Notably, wages continued to outpace inflation at 2.9%. U.S. dollar depreciated slightly in 2019.

Public debt at $22 trillion continued to increase (Exhibit 3), but it actually dropped on a % of GDP basis. Budget deficit jumped by a huge 40% up to $1.1 trillion and surpassed 5% of GDP. “Not sustainable”  is the only comment I’ll make here!

Federal Reserve’s balance sheet declined slightly on an annual basis. However, its real trajectory is better shown as a chart (Exhibit 4), as Fed ended run-off in September 2019 and begin increasing its holdings again. 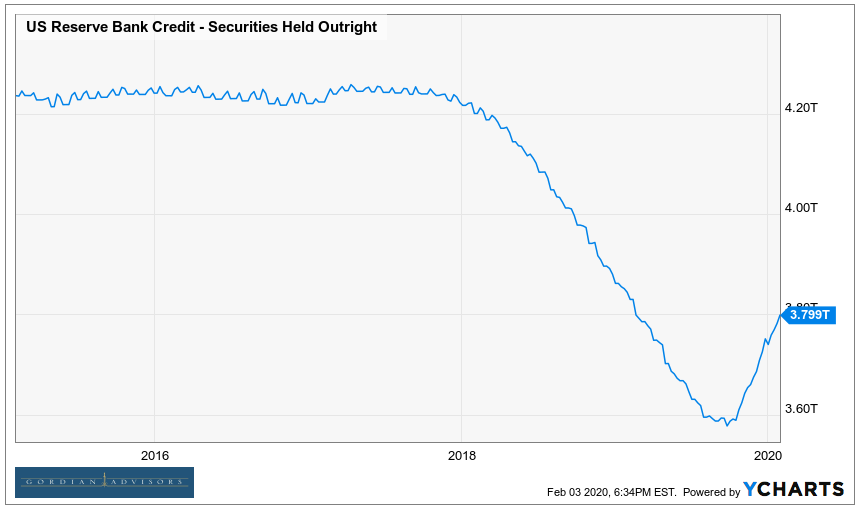 S&P 500 earnings growth decelerated rather sharply to only 3.6% (Exhibit 5).  P/E multiple, however, offset all of the earnings weakness by increasing 24% to 20.6x.  So pretty much all of the market’s 29% gain (excl. dividends) came from multiple expansion!

Improbably, 10-Year Treasury rate dropped by 77 basis points during 2019 to below 2%, and the average rate throughout the year did the same. More constructively, 30-Year Fixed Mortgage rates declined by 81 basis points ending the year at 3.74%. This last development is boosting housing activity across the country.

Finally, the housing sector is growing at a very fast pace (Exhibit 6).  Units are particularly strong, while pricing increases softened to 2.4%. U.S. auto sales declined to 17.4 million a year. We are back to calls of “peak auto” by many industry observers. Tesla seems to be sucking oxygen out of the rest of the auto makers as indicated by its incredible stock rise!