2018 was another eventful year (aren’t they all!). Exhibit 1 shows the weekly % changes in the S&P (green and red bars) and the level of the index (black line).  The annotations are the major stories of the year that [could have] affected the markets.  It’s not meant to be a comprehensive list, just my personal observations.

Most relevant for the markets, it was the year of tariffs and related administration reshuffling. Federal Reserve was also in focus with four rate hikes and Powell getting on Trump’s “naughty list”. There was a lot of foreign relations turmoil with many deals broken and made. 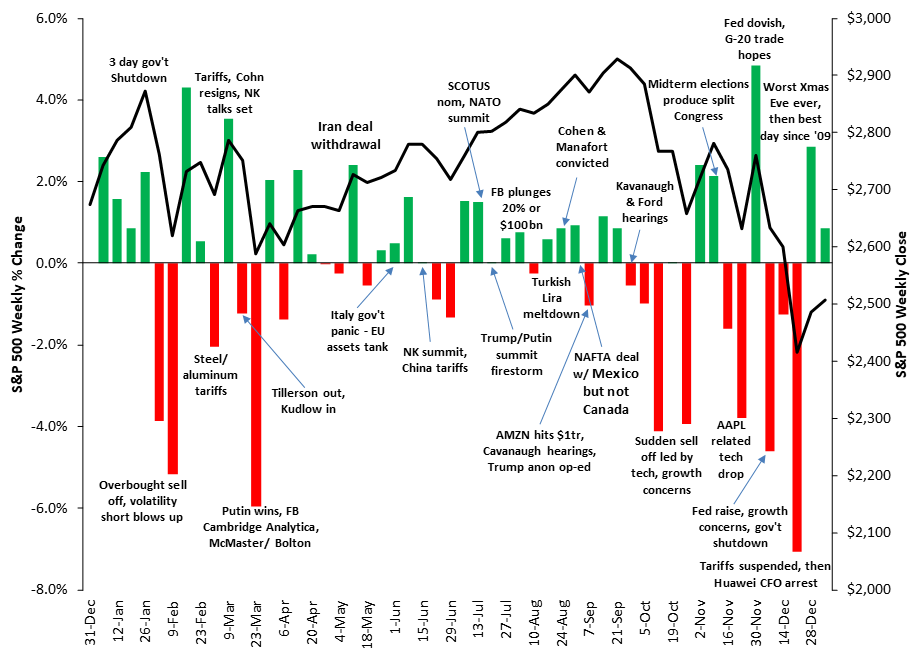 So how did all this turmoil affect the performance of major asset classes? With the exception of the dollar and fixed income it was hard to find positive returns (Exhibit 2). High quality bonds just barely eked out a plus sign after being in the negative territory for much of the year. All flavors of domestic and foreign stocks finished in the red. Commodities had another bad year with oil tanking on oversupply concerns and agricultural prices affected by tariff fights. After a torrid year in 2017, cryptocurrencies went out of style with Bitcoin losing 73%.

Note that 2018 was a tale of two distinct periods: pre- and post-September 30th (see the last two columns in Exhibit 2). The various flavors of US stocks were up 10% to 20% going into October but a sudden sell off led by big tech stocks and precipitated by “growth concerns” took the wind out of market’s sails (Exhibit 3). November was a month of consolidation and then December saw a resumption of steep decline that culminated in “the worst Christmas Eve ever”. It was, however, followed up by the best day since 2009 with the market rising 5% on December 26! (and biggest one-day point gain for the Dow ever). 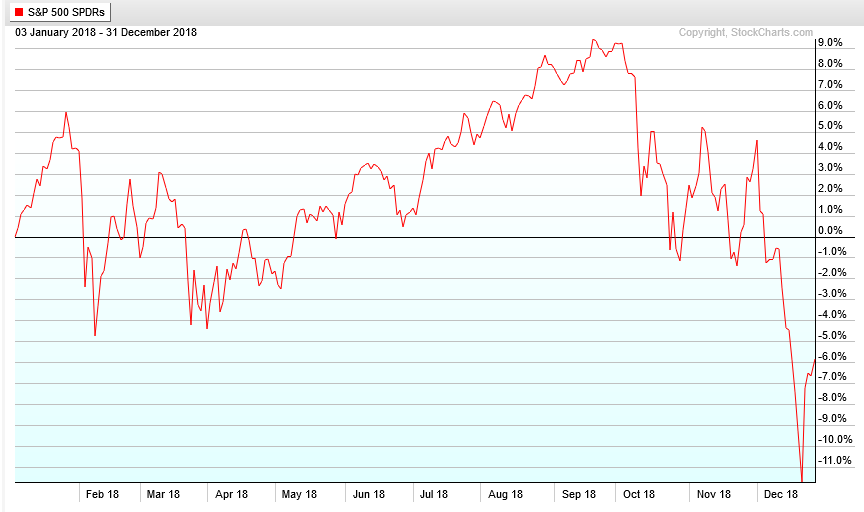 Switching gears to fixed income, government bonds had a good year driven by late-year flight to safety (Exhibit 4). Foreign bonds that hedge the dollar exposure did well, while their unhedged counterparts performed poorly.  Corporate bonds suffered from the risk-off stance particularly in the more “adventurous” areas of preferreds and high yield. Once again, you can clearly see the change in risk preference around September 30th. Actually, that is the perfect illustration of the way we use bonds in client portfolios – as a stable “ballast” portion to offset stock declines. 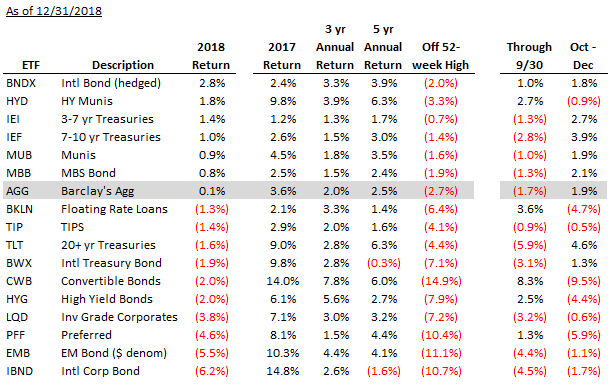 As a companion piece to this post, you might want to check out Ben Carlson’s market quilt chart.