I would like to finish the 2017 year-in-review series by taking a look at major economic indicators. I have to admit that looking at this “ancient history” seems silly given the tremendous market volatility over the past few days. Our view in a nutshell: while unsettling this week’s market behavior is not abnormal, is healthy and the pullback was quite overdue. Before moving on to fundamentals (which remain very healthy), I just want to use one chart to put things in perspective. Exhibit 1 shows S&P 500 performance going back to beginning of 2017. The market is still up 23% in just over 13 months and the recent drop doesn’t look quite so dramatic on the longer scale. That being said, please contact us if you are worried and would like to discuss your individual portfolio. 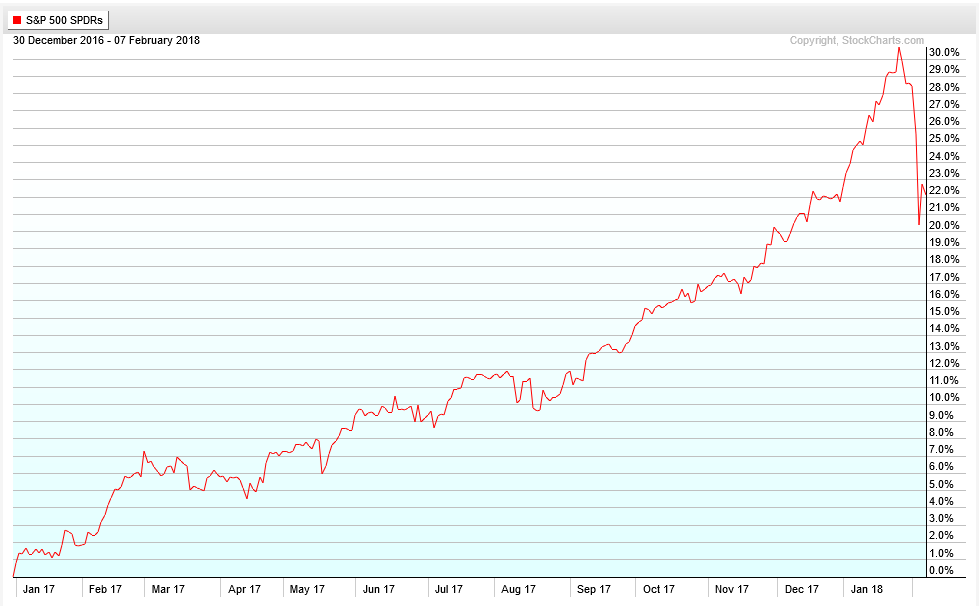 Moving on to the fundamentals, the employment situation continued to improve in 2017 (Exhibit 2).  The U.S. economy added two million new jobs (171,000 a month), but that metric has been decelerating over the last few years.  Total employment increased 1.4% which was double the steady 0.7% population growth.  The unemployment rate ended the year at 4.1%, which is well within the range of what Fed currently considers full employment.  Likewise, U-6 rate dropped to 8.1% – it’s a broader measure defined as “Total unemployed, plus all marginally attached workers plus total employed part time for economic reasons”.

Real GDP growth re-accelerated to 2.3% last year (Exhibit 3).  Inflation as measured by CPI remained at 2.1%. With both unemployment and inflation now solidly in Fed’s target range, it is likely to continue with the campaign of raising interest rates. There were three 0.25% raises in 2017 and most observers expect 3 or 4 more this year.  After a few strong years, U.S. dollar dropped by 8.6% which is not necessarily bad as it helps our exports.

Budget deficit went up by 14% to $666bn (ominous coincidence?) or 3.4% of GDP. With the tax cuts filtering through the budget starting in 2018, we could see very large increases in both deficit and debt levels. Federal Reserve’s balance sheet was steady at $4.2 trillion, which is surprising since they started the reduction program in October 2017. Throughout 2018 the Fed will ratchet up its balance sheet reduction initiative, so we’ll see how much progress they actually make in the next year’s analysis.

S&P 500 earnings grew by a very solid 17% picking up pace from 2016 (Exhibit 5).  This was driven by both expanding profit margins and sales growth. Dollar weakness was a nice tailwind for multinational companies as well. P/E multiple expanded slightly to 21.5x, which combined with the earnings growth resulted in a outstanding 19.4% return (excl. dividends) for the index.  10-Year Treasury rate actually dropped during 2018 to 2.40%, although the average rate throughout the year was actually 50 basis points higher than in 2015. 30-Year Fixed Mortgage rates also dipped by 33 basis points ending the year at 3.99%. This might be a last call for generational lows in mortgage rates for those of you considering purchasing a new home or refinancing an existing one.

Finally, the housing sector continued improving (Exhibit 6).  Both unit growth and price increases stayed healthy. It [still]remained to be seen how [potentially] rising mortgage rates will affect these trends. U.S. auto sales actually decreased by 1.7% to 17.6 million a year. Many industry observers are now talking about “peak auto” – the idea that the car sales market has plateaued and the growth will become harder to come by. Longer term trends (Uber, driverless cars, etc.) would certainly support this view.