Continuing with the 2017 year-in-review series, I am going to take a look at broad asset classes in this post.  Foreign stocks were best overall performers as they finally play catch-up after several years of underperformance (Exhibit 1). Fixed income and commodities had positive albeit more muted returns. In fact, the only major asset class to post losses was the U.S. Dollar (after several strong years).

I put Bitcoin in there just for context on how outsized its 2017 move was (there is no actual ETF you can invest in). I plan on doing a separate post detailing our views on cryptocurrencies, but for now let’s just say that we consider that space highly speculative and not suitable for most investors. 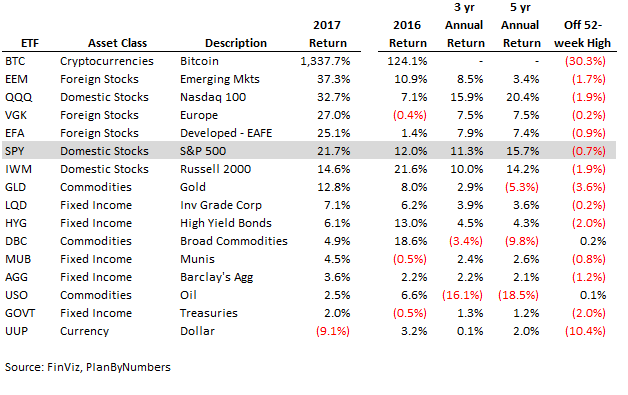 Digging a little deeper into domestic stock market, Large Caps (particularly growth) did exceedingly well (Exhibit 2).  Midcap also did fine, while Small Caps had a respectable but relatively lower returns. Growth stocks of all sizes outperformed their respective value counterparts. I would note that all of these trends were a complete reversal from 2016 and 2016 in turn was the reversal of 2015.

Another interesting “slice” is looking at performance of various market factors represented by popular Smart Beta ETFs (Exhibit 3). Momentum, quality and some multi-factor funds did best, while dividends, low volatility and fundamental indexing lagged behind the overall market. Note that there is a strong negative correlation between 2016 and 2017 returns for most factors. That makes it harder to stick with your factors leading many investors to chase performance at the worst time. 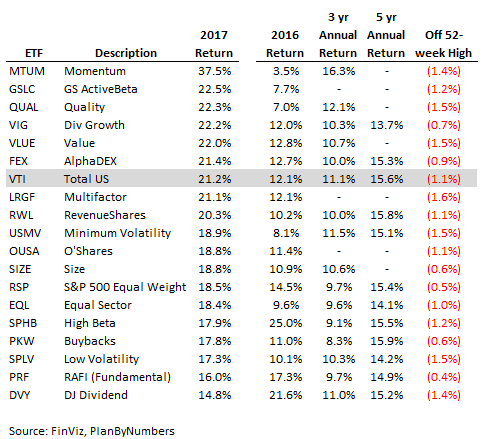 Switching gears to fixed income, all manners of foreign bonds had a great year largely driven by weak dollar (Exhibit 4). Munis and Corporates did well too, especially High Yield subsets. Treasuries have been weak (aside from very long ones) as the Fed got more serious about raising rates with three increases in 2017. 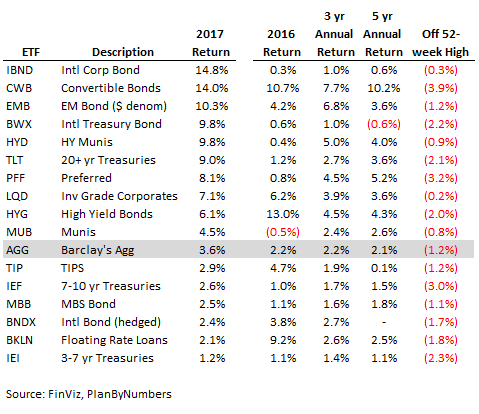