This time of the year I like to look through some of my performance spreadsheets to see how things are going in various investment areas. Here are some of my observations:

Asset classes
• Global stocks are doing quite well, especially large caps
• Gold is doing ok, while broader commodities and energy in particular are not
• All manner of bonds are hanging in there despite two Fed rate raises, although riskier sectors are doing better
• After several years of strong gains U.S. dollar is taking some time off 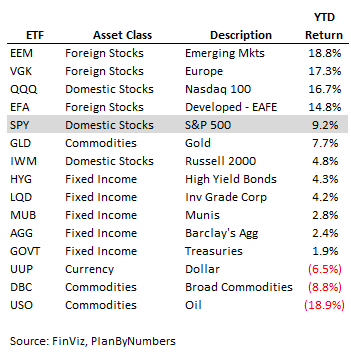 Style box – Large cap, particularly on the growth side has been the place to be this year. That’s pretty much a mirror image of what this looked like in 2016 (mean reversion at work) 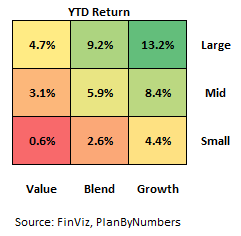 Sectors & Industries
• More mean reversion here: various tech and healthcare areas are catching up after lagging in 2016
• Energy and commodity plays are once again bringing up the rear
• During June there was a marked change in tone with Nasdaq/Technology leaders getting hit hard while Financials found their footing again. That’s something to keep an eye on (although if you index US stocks like us, it doesn’t much matter where the gains come from).

Countries
• On top of the list are many European and Asian countries, including some unexpected names like Greece, Argentina and Mexico
• Resource play such as Russia, Canada, Brazil & Norway are on the bottom. In fact, the only major foreign market with YTD losses is Russia.
• Good old US of A is doing ok at +9% but that still puts it well towards the bottom of the list
• On that [unintentionally] unpatriotic note – Happy Fourth of July everyone!