Continuing with the 2016 year-in-review series, I am going to take a look at broad asset classes in this post.  Small stocks in were best overall performers driven by higher domestic exposure and the policies promised during the election (Exhibit 1). Riskier asset classes in general did well led by commodities, high yield, U.S. and emerging market stocks. Dollar rose again albeit much less than prior two years. Fixed income investments were mixed (see below), while foreign stocks lagged once again particularly on the European side. That’s four straight years of outperformance (almost seven actually) for domestic stocks vs foreign counterparts – at some point it WILL reverse. 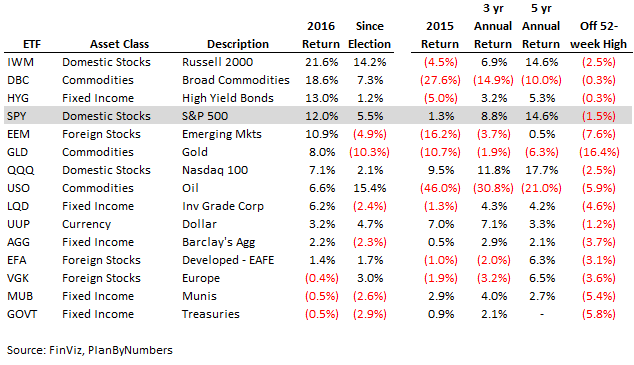 Digging a little deeper into domestic stock market, Small Caps (particularly value) did exceedingly well (Exhibit 2).  Mid-caps did great also, while Large Caps had a respectable but relatively lower returns. Value stocks of all sizes outperformed their respective counterparts. I would note that all of these trends were a complete reversal from 2015 and early 2017 is the reversal of 2016. These things are quite cyclical but good luck trying to time it just right. 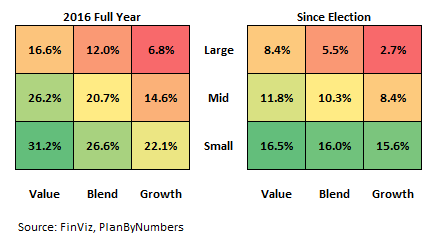 Switching gears to fixed income – the riskier the bonds the better they did in 2016 (Exhibit 3). Corporate bonds of all types were in the lead recovering from a tough 2015.  Currency-hedged International bonds did ok, while various rate-sensitive government categories lagged behind, particularly after the election. Munis were the only negative category as they faced reduced tax rates under the new administration and therefore had to re-rate tax-equivalent yields. 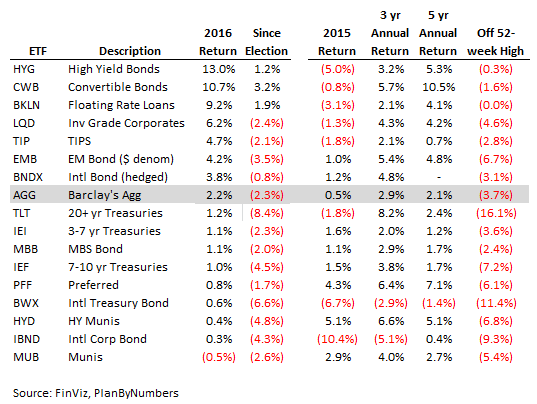