Last week I reviewed the major events of 2013 and their impact on the market (2013 Review: Significant Events).  In this post I would like to dig a little deeper.  Even though the tables below reflect 2013 market performance of actual ETF products, this discussion is for informational purposes only and is NOT a recommendation to buy or sell any one security.

As shown in Exhibit 1, U.S. equities were the strongest asset class, followed closely by European and developed stock markets.  Emerging markets didn’t do so well with a 3.7% decline.  Commodities had a rough year with the broad index dropping 7.6%.  Oil did relatively well, while gold was THE WORST asset on this list with a whopping 28.3% drop.  Bonds didn’t fare well either as the Fed set the stage to reducing QE which led to rising interest rates. 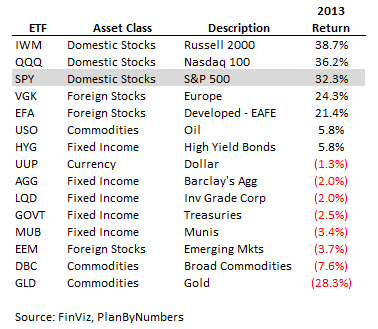 Sector performance showed a typical “risk-on” environment (Exhibit 2).  Investors were enamored with “growthy” areas: solar, biotech and Internet/social media.   As an aside, solar stocks had a banner year that needs to be put in context – this rally follows a precipitous 3-year drop.  TAN has lost 82% in 2010-2012 and is still down 59% from Dec 2009 (SPY is up 80% during the same timeframe).

Consumer-related and industrial areas also had a great year.  Materials and income-oriented sectors lagged the overall market.  Gold miners lost more than half of their value (on top of posting losses in 2011 and 2012).  I am NOT making an investment call – but could GDX be the next TAN?

Performance for the select countries and regions is shown in Exhibit 3 – some of the smaller countries had very strong/weak results but I want to focus on the major ones.  Japan and developed Europe lead the way as economic policy and reforms were cheered by investors.  Emerging markets overall and BRIC countries in particular led to the downside.  This underperformance was attributed to the struggling commodities markets, rising rates in the U.S. and some structural local problems.  Interestingly, the “Frontier markets” (which are even less developed than emerging) were in favor last year. 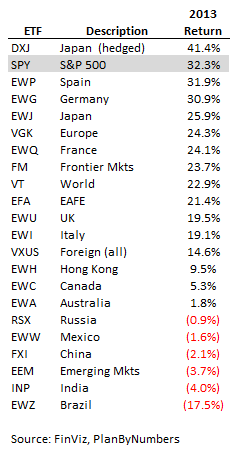 There were few places to hide in the fixed income markets in 2013 (Exhibit 4).  Riskier and hybrid (convertibles and preferreds) groups have outperformed, while the interest rate-sensitive ones saw fairly significant losses.  This picture is pretty typical for periods of improving economy with rising rates.  Municipal bonds had a tough year among increasing concerns about pensions, Detroit bankruptcy and issues in Puerto Rico.  International bonds didn’t do well either with the exception of corporates. 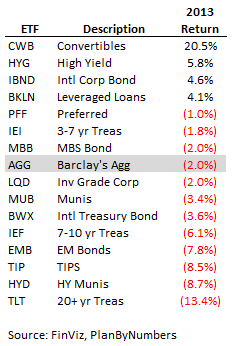 Next time, I plan to focus on reviewing economic indicators for 2013.